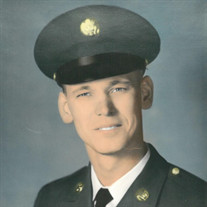 James Albert Stain, age 79, of Pickford, MI, died unexpectedly on January 2, 2021 at home. He was born on August 30, 1941 in Sault Ste. Marie, MI, to Orville G. Stain Sr. and Viola Elizabeth (Ahola) Stain. Jim grew up in Pickford, moving to the family home at the corner of M-129 and Tone Road (M-80) when he was six years old. He attended Pickford Schools, graduating with the Class of 1959. As a teen, he worked with his father completing furnace installations for Montgomery Ward. After graduation, in addition to working with his dad, he also worked for the Soo Creamery and Lipsett Chevrolet. He married the love of his life, Sandra Jean McConkey, on December 14, 1963 at the Pickford Church of the Nazarene. Jim served in the US Army from 1965 to 1967, serving much of that time in Vietnam. After his service, he returned to Pickford and started operating Stain Heating. It wasn’t long before he was so busy that he asked his younger brother Ed to return to Pickford and join him in Stain Brothers Plumbing and Heating. In 1998 Jim and Ed built Mid-Point Marathon on the property of their childhood home at M-129 and M-80. They continued to operate Mid-Point, working together in their “Stain Brothers” partnership for over 50 years. As a young man, Jim played softball for many years, usually manning 1st base. He also loved a good game of horseshoes. Jim enjoyed camping trips to area state parks with his family throughout the summer months and was usually seen in the winter snowplowing at the Mid-Point in his blue Jeep. Jim was an accomplished metal worker who often designed and manufactured duct work and other equipment for the heating systems that he helped install. He was able to envision and manufacture components that served a need in mechanical systems or equipment, and his engineering and craftsmanship expertise was sought on many occasions by his friends, relatives, and business associates as they stopped by his garage to ask him for his advice, or sometimes just to visit. Jim’s “shop” door was always open to those who needed his time or assistance. Another of Jim’s hobbies was car restoration. He completely restored a 1929 Chevy pick-up which was featured in the Detroit Auto Show and had a 1949 GMC pick-up restoration in process. Always demonstrating the ability to make something extraordinary out of what appeared to be nothing worthwhile, Jim scoured area junkyards and online sales sites to find parts that he then refurbished and utilized in his restoration process. Complete rebuilds of vehicles were not out of his capability, as he built a working dump truck out of an abandoned school bus and designed and manufactured a motorhome for his camping trips with Sandy in the early days from a used truck camper. Perhaps Uncle Jim (or Uncle J, JJ, or Bro-Bro) was most accomplished in his status as a favorite among his nieces and nephews and the children of family friends. Always quick to spin a story, play a trick, tell a joke, or do something (sometimes slightly outrageous) to get a laugh, Jim regularly had a following of little (and sometimes also bigger) kids who adored him and sought his attention. Those that were privileged to spend significant amounts of time with Uncle Jim have lasting memories of nicknames he bestowed, entertaining stories he told, silly sayings he taught, and practical jokes he pulled. Jim is survived by his wife of 57 years, Sandy; siblings, Edward (Brenda) Stain and Deborah (Steve) Wallis of Pickford, Phyllis (Donald) Anderson of Sault Ste. Marie, and Sharon (Edward) Piroska of New Palestine, IN; brothers-in-law, Richard (Kathy) McConkey, Steve (Peggy) McConkey, and Tim McConkey, all of Pickford, and Everett Eagle of Sault Ste. Marie; nieces and nephews including, Paul Eagle, Bob Eagle, Ken Eagle, Mike Eagle, Ron Eagle, and Karen Baldino; Jeannette Johnson, and JoAnn Harrington; Steve Christensen, Gary Christensen, and Terri Shopshire; Mike Stain, Richard Stain, Dave Stain, Bobby Stain, Frances Stain, and Denise Stain; Jim McGill, Darin McGill, Roger McGill, Caryl McGill-Densmore, and Sharyl McGill-Savenkoff; Jim Anderson, Brian Anderson, and Dawn Parker; Angela Nettleton and Chad Stain; Amy Bird, Ryan Piroska, and Kelly Phillippi; Adam Wallis and Doug Wallis; Dianne Paige, Darren McConkey, and Paul McConkey; Carrie Cryderman, and Cliff McConkey; numerous great-nieces and nephews; and all of the special employees at Mid-Point Marathon. Jim is preceded in death by his parents, Orville and Viola Stain; siblings, Alice Eagle, Orville Stain Jr., Gloria Christensen, David Stain, and Thelma McGill; nephews, Todd Stain and Randy Anderson; and in-laws Clifford and Bertha McConkey. A private family service will be held. Jim will be laid to rest at Oaklawn Chapel Gardens in Bruce Township, MI.

The family of James Albert Stain created this Life Tributes page to make it easy to share your memories.

Send flowers to the Stain family.