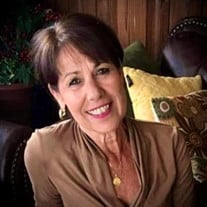 "Tomorrow is going to be beautiful," Janet Rae (O'Brien) Di Foggi whispered to her granddaughter Verra the day before she peacefully passed from her earthly life. Janet Rae O'Brien, born June 6, 1953, attended Sault schools and attained an associate degree from LSSC. She worked as Site Supervisor for Early Head Start at Community Action from 2000 - 2017 and was highly revered by her coworkers. Grace, class, and beauty would adorn her as she left those who faithfully walked her home. To those who loved her, thoughts of her radiant smile, warm twinkling eyes, and welcome hugs will be held dear. Her heart was always open, and her unrestrained laughter filled any room with joy. Janet embraced each new day and faced life's challenges with the ease of a lake breeze. Sunshine on her shoulders, toes in the sand, she relished beach days with loved ones, especially her girls and grandchildren, her crowning glory and greatest legacy. Janet is survived by daughters Cara (Di Foggi) Tazelaar (Jay), Anna Di Foggi, and Cali Di Foggi; grandchildren Verra Hazen and Leonard Luyckx; mother Helen (Kellan) O’Brien; brothers Dr. Robert (Brenda) O’Brien and Barry O’Brien; numerous loving nieces and nephews, cousins, special cousin Patti Kellan, and aunts and uncles. She leaves behind the love of her life, Robert Burtt, whose love and tenderness brought her boundless joy. She will be deeply missed by the many who were blessed to call her friend. She was preceded in death by her father Robert O’Brien and brother David O’Brien. Per Janet’s wishes she has been cremated. A memorial service to honor our beautiful Janet will be held in June, at a beach, in the sun. Flip flops required. May you always walk in sunshine, dear Janet. May God hold you in His arms until we meet again.

The family of Janet Rae Di Foggi created this Life Tributes page to make it easy to share your memories.