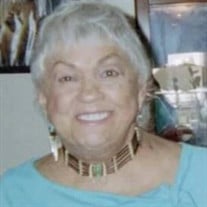 Jeannette Theresa Lawson, age 82, of Mackinaw City, Michigan, died at McLaren Hospice House in Cheboygan, Michigan, on January 2, 2022. Jeannette was born on January 1, 1939, in Schaffer, Michigan, to Francis and Yvonne Cody (Auger) Vanderberg. Jeannette grew up in Schaffer, Escanaba, and Gladstone, Michigan, and later participated in the opening of the Mackinac Bridge. Jeannette met and married Roy Nelson. They started a family, raising four children, in Wayne, Michigan. Later, Jeannette moved back to Gladstone before settling in Sault Ste. Marie where she became an active member of the Tribal Elder community. Jeannette was a member of Sault Tribe of Chippewa Indians. Jeannette was a very creative and adventurous woman. She loved to make Native American jewelry and spending time with her grandchildren. Jeannette also participated in a bowling league. Jeannette is survived by her sons, Duane (Lori) Nelson of Gladstone, Michigan and Dean Auger of Escanaba, Michigan; daughters, Renee Nelson of Tennessee and Jeanine Nelson of Whitehouse, Tennessee; twelve grandchildren; step-sisters, Theresa and Gail Nordquist; and eighteen great grandchildren. Jeannette is preceded in death by her parents; and brothers, Ronald Vanderberg and Dave (Black Beaver) Vanderberg and two great grandchildren. No services will be held at this time. Galer Dodson Funeral Home & Cremation in St. Ignace, Michigan is serving the family. Condolences may be sent to the family at www.galerfuneralhomes.com.

The family of Jeannette Theresa Lawson created this Life Tributes page to make it easy to share your memories.