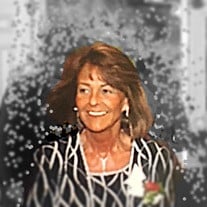 Joann Eunice Bailey, age 78, of Drummond Island, Michigan, died November 24, 2021, at home. She was born December 3, 1942, in Sault Ste. Marie, Michigan, to Joseph Francis and Eunice Pearl (McGuire) Malkowski. Joann grew up in DeTour and graduated from DeTour High School in 1960. She at-tended cosmetology school in Muskegon, Michigan. She married and then Lansing was her home when her daughter, Kelli was born. A few years later, she returned to the DeTour area to make her home on Drummond Island where she lived the rest of her life. She worked in the office at Drummond Dolomite for years before moving on to work for DeTour Area Schools; She worked as secretary to her lifelong friend and then athletic director, David Miller and then as administrative assistant of Drummond Elementary School. Even after retirement, she continued to work a few hours at school each day until recent years. She loved being a Mother and Grandmother; Her grandson Trey was the light of her life and he came to visit her for an extended period of time each summer. A time when wonderful memories were made for both of them. Joann is survived by her daughter and son-in-law, Kelli and Mark Ouimet of Dexter, Michigan; her grandson, Trey Ouimet; sisters, Diane Bosley (Wayne) Grams of DeTour, Michigan and Owatonna, Minnesota, Sharon (David) Klamerus of Drummond Island, Janice E. Newell of DeTour; brother, Gerard Malkowski of DeTour, and many beloved nieces and nephews. Joann was preceded in death by her parents. No public services are planned at this time.

The family of Joann Eunice Bailey created this Life Tributes page to make it easy to share your memories.