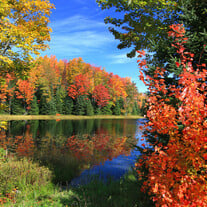 John Evashevski, husband, father, teacher, coach, died on Sunday, May 30th in St. Ignace, Michigan at his home. He was 70 years old. The cause of death was due to complications related to Multiple System Atrophy (MSA) Mr. Evashevski was born in Pullman, WA on July 15, 1950 and grew up in Iowa City, IA. He spent his summers with his extended family in Northern Michigan where he eventually came to live and raise a family. Evashevski was a gifted wrestler. He earned a state title for Iowa City High in 1968 at 154lbs and later, for the University of Iowa, a 1972 Big Ten championship in the 177 weight class. It was not uncommon for him to lose 10-15 pounds to make weight, and having dinner after weigh-ins became an important event. His cousin Prentiss "Giz" Brown, who was concurrently studying law at Iowa, once promised to make him dinner on the condition he bring a date. That evening he arrived with his future wife. Upon graduating from Iowa with a Bachelor of Science and a state teachers certificate, Mr.Evashevski taught and coached football in Petoskey, MI for two years before taking a job at St. Ignace Area Schools in 1974 where he taught chemistry and later middle school science. There he founded the wrestling program with mats he sourced from a defunct college on Mackinac Island. He was the head coach for 28 years with a brief hiatus in the early 1990s. Evashevski retired from teaching in 2005 and subsequent pursuits included a stint as a special education teacher for Gros Cap School, a board member for the Eastern National Forest Interpretive Association, and environmental consulting for Mackinac Environmental. He was also a member of the local Chocolate Society. Evashevski was known for his perseverance which he honed on the wrestling mat and applied to other areas of his life. He was an avid runner and completed 16 Marathons. Not satisfied with his childhood piano skills, he restarted lessons as an adult, determined to be better. He went on to write several songs, recorded an album, and performed at numerous community concerts. He was an enthusiastic hunter and fisherman, and a dedicated conservationist. He built a house for his family on land he discovered while hunting which featured a high ridge with a southern view spanning the area from Lake Huron to Lake Michigan. His brother Jim Evashevski once quipped “Most Americans will brag about their new car but John will tell you about his lookout point”. He made numerous trips to Lake Superior Provincial Park, the Dakotas, Montana, Alaska, and the Arctic Circle. His enthusiasm for the outdoors endured beyond his ability to experience them. While immobile during the late stages of his disease, he would still ask family members if they saw any deer or caught any fish and where. Mr. Evashevski is survived by his wife, Lucy Evashevski, his two sons and their families, Forest Matthew Evashevski and Adam Patrizia of New York City, and Michael Charles Evashevski and partner J. Mike Smith of San Francisco, CA, and his six siblings, Forest and Jean Evashevski of Corvallis, Oregon, Jim and Marty Evashevski of Nashville, TN, Marion Evashevski of Petoskey, MI, Tom and Debbie Evashevski of St. Ignace, MI, Bill and Genevieve Evashevski of Good Hart, MI, and Kassie Evashevski and Charle Landry of Larchmont, NY. A memorial celebrating Mr. Evashevski’s life will be held at the St. Ignace United Methodist Church on Wednesday, June 9, 2021 with visitation at 2:00pm and a service at 3:00pm. Online donations to support MSA research can be made using the following link: https://philanthropy.mayoclinic.org/donateMC The designation selection should be "other" and “Low/Singer MSA Research” should also be entered. Checks can also be mailed to: Low/Singer MSA research Department of Development Mayo Clinic, 200 First Street SW, Rochester, MN 55905

John Evashevski, husband, father, teacher, coach, died on Sunday, May 30th in St. Ignace, Michigan at his home. He was 70 years old. The cause of death was due to complications related to Multiple System Atrophy (MSA) Mr. Evashevski was born... View Obituary & Service Information

The family of John Kobs Evashevski created this Life Tributes page to make it easy to share your memories.

Send flowers to the Evashevski family.