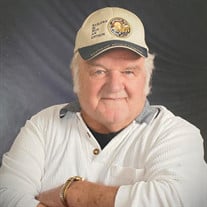 John “Jack” Frederick Luepnitz, passed away peacefully in his sleep on Friday, January 7, 2022. His family and friends had the opportunity to say goodbye and were with him in spirit. Jack was born June 22, 1940, on the Brevort Lake family homestead. The Luepnitz family settled there in 1882. They cleared and cultivated the property for crops and livestock. This hard-working lifestyle instilled beliefs that lasted his lifetime. Mainly, ‘if you want something, you have to earn it. To earn it, you have to work for it.” Upon graduation from high school in 1958, he entered the International Brotherhood of Electrical Workers (IBEW) apprenticeship program. After receiving his journeyman’s card, he worked many commercial and industrial projects in the Upper Peninsula. In 1968, he started work at the Midland Nuclear Plant. He worked there 16 years for the IBEW and the Bechtal Power Corporation as a field engineer. In 1984, he moved back to Brevort Lake and returned to the IBEW. He retired after 41 years of being an electrician, in 1999. In 1987, he married the love of his life, Mimi Bentgen, and they were together thirty years until her death in 2017. Playing cards, pool, bowling, and watching Pro Wrestling were some of his hobbies. His favorite though, was playing sports with his children. For nine years, he coached little league and was an integral part of the construction of the Midland Southtown Little League fields. He enjoyed working with his excavation equipment, making many paths on his property. It gave a great sense of pride riding these trails on his four-wheeler with his beloved dog Sparky. Wednesday card games were Jack’s treasured best friend time. He looked forward to these days and the competitive, spirited fun with these friends. It is well known that his euchre strategy was sometimes not appreciated by his partner. Jack was a lifelong parishioner at Moran Immaculate Conception Church and Knights of Columbus member for over 40 years. He enjoyed volunteering at fundraising and community events whenever he was needed. These events included building fish cribs in Brevort Lake with the Straights’ Area Sportsman’s Club and helping kids catch their first trout at the annual Fish Fest in St Ignace. Surviving are his daughter, Marybeth Webb (Bill Owens); daughter, Janet (Dave) Whiddon; son, John (Tammy) Luepnitz; son, Andy (Ann) Luepnitz; daughter, Melissa Bentgen (Tom Sheran); brother, Carl (Lori) Luepnitz; sister, Lois Carr; sister, Mary Miller; brother, Bill Luepnitz; brother, Fred (Debbie) Luepnitz; grandsons, Trevor Whiddon and Will (Samantha) Whiddon; granddaughters, Brooke Luepnitz, and Abby Luepnitz; many nephews and nieces; and card buddies, Ray and Polly Lowetz, Tom and Mary Burris, Louie Colgrove and Levi Moses. Jack was preceded in death by his mother, Patricia Luepnitz; father, Fred Luepnitz Sr.; brother, Dale Luepnitz; brother, Ken Luepnitz; sister, Ruth Houdek; brother, Art Luepnitz; brother, Frank Luepnitz; and wife, Mimi Luepnitz. Visitation will be held Friday, January 14, 2022, from 4:00 PM until 6:00 PM at Galer Dodson Funeral Home & Cremation, 240 McCann Street in St. Ignace. Mass of Christian Burial will be celebrated on Saturday, January 15, 2022, at 12:00 Noon at Immaculate Conception Catholic Church, W1934 Church Road in Moran. Burial will be in the Spring in Immaculate Conception Catholic Cemetery in Moran. In lieu of flowers, the family asks that you join the Straits Area Sportsman’s Club by going to this site and paying $25.00. (https://straitsareasportsmensclub.net/get-involved) Our goal is to increase membership and fund several key projects in our local area. Galer Dodson Funeral Homes & Cremation in St. Ignace, Michigan is serving the family. Condolences may be sent to the family at www.galerfuneralhomes.com.

John &#8220;Jack&#8221; Frederick Luepnitz, passed away peacefully in his sleep on Friday, January 7, 2022. His family and friends had the opportunity to say goodbye and were with him in spirit. Jack was born June 22, 1940, on the Brevort Lake... View Obituary & Service Information

The family of John "Jack" Frederick Luepnitz created this Life Tributes page to make it easy to share your memories.

John “Jack” Frederick Luepnitz, passed away peacefully in his...