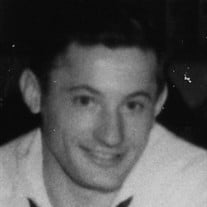 John Nobliski was born in Henrietta, Oklahoma to Caroline and Frank Nobliski (Nowobilski) March 26, 1921. When he was 5 years old the family moved to their permanent home in Detroit Michigan. Our wonderful, loving, caring, strong father passed... View Obituary & Service Information

The family of John Nobliski created this Life Tributes page to make it easy to share your memories.

John Nobliski was born in Henrietta, Oklahoma to Caroline and...

Send flowers to the Nobliski family.