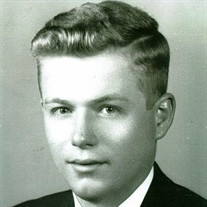 Kenneth James Freebury, age 85, died quietly at Castle Rock Retirement Center in St. Ignace, Michigan, on the evening of October 31. He was born in Chicago Illinois, the eldest of three siblings, to James and Delores (Hering) Freebury on January 17, 1935. The Freebury family later moved to Kalamazoo, Michigan, where he graduated from St. Augustine Cathedral High School as an accomplished athlete and precocious student. As a young adult he joined the Michigan Air National Guard, where he served for many years, attaining a commission as Second Lieutenant. With an analytical mind and exceptional memory, he pursued a career in accounting. At the age of twenty-one, without the hindrance of a college degree, he was the youngest person in the State of Michigan to sit and pass the Certified Public Accounting exam on his first attempt. His career as a CPA spanned over half a century much of that time owning his own firm. He met and married Jane (Marsh) Freebury, a nursing student, and love of his life in 1956. They had seven children in the following nine years. Shortly after the birth of their last child he and Jane made the adventurous decision to join the Peace Corps. In 1966 their young family traveled to Costa Rica, for a two-year tour, where he served as the Costa Rican Peace Corps Deputy Director. After returning stateside to Kalamazoo for a short time, the decision was made to move to the Eastern Upper Peninsula of Michigan, where he and Jane felt that their children would receive a good education, and have the advantages of living in a more rural setting. After living and establishing a CPA firm in Sault Ste. Marie, Michigan, the Freebury family moved to Cedarville, Michigan, in 1970, where all the children graduated from Les Cheneaux Community Schools. After his family, his verifiable passion was sports. At his children’s sporting events he could be seen quietly, but avidly watching, and cheering from the sidelines. He enjoyed many Cedarville Trojan championship seasons in football, basketball, and track. He would often recount favorite exploits, of his children, in his later years. He remained a staunch supporter of Cedarville athletics throughout his life. He will be remembered for his wry humor, brutal honesty, intellectual prowess, fervent support of his family, and sometimes salty tongue. His absence will be significantly felt by his family. He is survived by his children, James, Timothy (Marianne), Mark (Charlotte), Paul, Mary (Victor), Robert (Bonnie) and Michael; eight grandchildren, Katie, Greg, Alexis, Ashley, Kara, Neil, Joel and Cameron; seven great-grandchildren, Cameron, Mason, Marin, Jonas, Haven, Levi and Layla. He is also survived by a brother, Tom, a sister, Helen (Tom); and sister-in-law, Amy. In addition to his parents, Ken was preceded in death by his wife, Jane Freebury; and sister-in-law, Carolyn Freebury. No services are planned at this time. Memorial contributions may be directed to the Cedarville Trojan Athletic Booster Club, P.O. Box 530, Cedarville, MI 49719. R. Galer Funeral Home in Pickford, Michigan is serving the family. Condolences may be sent to the family at www.rgalerfuneralhome.com.

Kenneth James Freebury, age 85, died quietly at Castle Rock Retirement Center in St. Ignace, Michigan, on the evening of October 31. He was born in Chicago Illinois, the eldest of three siblings, to James and Delores (Hering) Freebury on January... View Obituary & Service Information

The family of Kenneth James Freebury created this Life Tributes page to make it easy to share your memories.

Send flowers to the Freebury family.