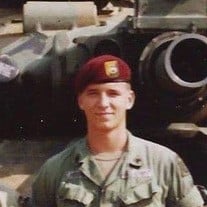 Kevin Lynn Hershman, age 56, of St. Ignace, Michigan, died unexpectedly at home December 18, 2021. He was born September 21, 1965, in Parsons, West Virginia, to Alfred William and Wilma Marie (Shahan) Hershman. Kevin spent some of his childhood in Craig, Alaska until 1973 when he and his family relocated to St. Ignace. Kevin attended St. Ignace Area Schools and graduated from LaSalle High School in 1983. Prior to graduating he was able to enlist in the US Army through an early enlistment program. Kevin served in the 82nd Airborne Division and reached the rank of Sgt. He served for 4 years and returned home to Michigan. Kevin obtained his Associates degree in Criminal Justice and worked as a corrections officer with the MDOC for 9 years. Throughout the years Kevin had a bit of a traveler's soul. His favorite job was working in the forest as a logger. At times it seemed like more of a hobby. Kevin's travels and experiences eventually lead him back to St. Ignace where a majority of his life has been rooted. Kevin worked locally at Family Fare and became well known for his friendly demeanor and amazing customer service. He will be missed dearly by those who knew him. Kevin was always good for a laugh and a quick joke. He was a history fanatic all his life and was especially interested in military history. He will always be remembered for his laugh, upbeat personality and his many stories he shared about his life. Kevin is survived by his parents, Alfred and Wilma of Hessel; four children, Erica Hershman of Sault Ste.Marie, Joseph Hershman of Kinross, Matraca Watson of West Virginia, and Dillan Pavlat of Kinross; 3 grandchildren, Lilly Mays, Remi Lounds, Hudson Lounds; his sister, Justna Hershman of Hessel; his nieces and nephews, Katie(Wayne) Davis, Heather Stelzer of Moran, Jared Fenlon of Lansing and Jacob Fenlon of Ann Arbor; his great nieces and nephews; and many other family and friends Kevin was preceded in death by his sister, Susan Stelzer; his grandparents; Dorsey and Opal Shahan and Herb and Iris Davis. There will be a celebration of life service to be announced in the summer of 2022. Galer Dodson Funeral Home & Cremation in St. Ignace, Michigan is serving the family. Condolences may be sent to the family at www.galerfuneralhomes.com

The family of Kevin Lynn Hershman created this Life Tributes page to make it easy to share your memories.

Send flowers to the Hershman family.