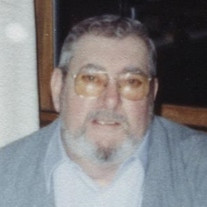 Lawrence Scott Knight, age 88, of DeTour Village, MI, died on December 15, 2020 in Marquette, MI. He was born on September 17, 1932 in Highland Park, MI, to John and Annie (Greieg) Knight. Lawrence was a Drummond Island resident for almost sixty years. He enjoyed building his own canoe and spent time racing canoes in Grayling on the Au Sable River. On September 20, 2020, Lawrence married longtime friend Wilma Roger on Drummond Island. Lawrence was in the United States Navy, serving in Korea on the USS Southerland. He was a member of the American Legion and the VFW as well as one of the founding members of the Drummond Island Moose. Lawrence is survived by his wife, Wilma; his 8 stepchildren, 6 girls and 2 boys, 5 daughters-in-laws, 2 sons-in-laws, 30 grandchildren, 26 great grandchildren (with one on the way); 2 brothers-in-law; and 4 sisters-in-law, And cousin Vivian Carmichael. Lawrence is preceded in death by his parents John and Annie, his sister Eleanor, his previous wife Millie knight, stepson Daniel Roger and grandson Andrew Smith. A private family service will be held at R. Galer Funeral Home in Pickford, MI. on January 8, 2021

The family of Lawrence Scott Knight created this Life Tributes page to make it easy to share your memories.

Send flowers to the Knight family.