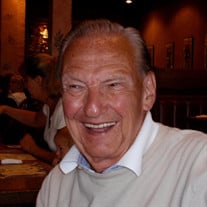 Former Mackinac Island resident and business owner, Lee Gilbert Abbey, passed away Thursday, September 23, in Traverse City at the age of 93. A graveside service will be at noon Friday, October 8, at Ste. Anne’s Cemetery on Mackinac Island. Known to his friends on Mackinac Island as Joe Abbey, he was born to Grace and Leon Abbey in Flint November 29, 1927. Mr. Abbey was a graduate of the Manlius Academy in Manlius, New York, and Ferris State University where he played on the basketball team. He spent his summers on Mackinac Island where his family had a home and business known as Abbey’s. Following service in the U.S. Army Air Corps during the closing years of World War II, Mr. Abbey returned to the Island to open and run the Scotch House, a purveyor of clothing from Scotland. He also had stores in Harbor Springs, Charlevoix, and East Lansing. He was married to Arletta “Letty” Davey, who he met on the Island, until she passed away in 1967. The Abbey children were reared in Kalamazoo and then Mr. Abbey retired to Traverse City in 1987, where he worked at Captains Quarters, a local Traverse City men’s clothing store, and only officially retired in 2019 at the age of 92. Lee Abbey was a lifetime member of the Scottish Rite Freemasonry, Traverse City Lodge #222, a founder of the Mackinac Island Chamber of Commerce, and an active volunteer with the Mackinac Island Arts Council. Surviving are four children and their families, Jim and Sheryl Abbey of Charlotte, North Carolina, Janice Abbey of Traverse City, David and Carolyn Abbey of Washington, D.C, and Catherine “Katy” and Mark Peterson of St. George, Utah; eight grandchildren, Paul, Leah, Natalie, Abby Lee, Danielle, Ellen, Michael, and Christopher; three great-grandchildren, Emma, Abbey, and Ruby, and his sister Virginia Vallor. In lieu of flowers, contributions can be made to the Mackinac Arts Council at P.O. Box 1834, Mackinac Island, MI 49757, or online at https://www.mackinacartscouncil.org/

The family of Lee Gilbert Abbey created this Life Tributes page to make it easy to share your memories.