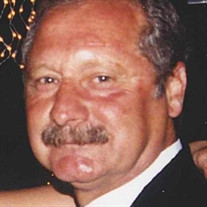 Lyndon “Chuck” Charles Ferguson Sr., age 70, of St. Ignace, Michigan, passed away on January 20, 2022, at Mackinac Straits Hospital after a short battle with cancer. He was born in his childhood home in St. Ignace on October 12, 1951, to parents Ernest “Fergie” Rae Sr., and Ella Mae (Roy) Ferguson. Chuck grew up in Evergreen Shores with many sisters and brothers and graduated from LaSalle High School in 1970. He joined the United States Army after graduation and spent the next four years being stationed in Alabama. He returned to St. Ignace to raise two children Chuck Jr. and Sherry and with his GI Bill, he went on to earn his Bachelor’s Degree in Accounting from Lake Superior State College. Since his youth, Chuck has always been a hard worker and often worked more than one job at a time over the years. He spent many years with Selden's Marathon Gas station and prior to that working at the Union 76 Truck Stop Station. After Selden's Marathon closed for business he worked at Enterprise Vending Co., Arnold Transit Co., Star Line and most recently at Shepler’s Mackinac Island Ferry as a shuttle driver. Chuck liked living a simple life; he enjoyed watching sports on the television and watching his favorite team; The Detroit Lions. He always looked forward to spending Saturdays with friends watching sports, playing pool, cards and the Wii. He was always very proud of his children and never missed watching his kids' sporting events over the years. He was a coin collector and enjoyed bowling on a league for many years. When Chuck wasn’t working or relaxing watching sports and movies, he was enjoying the great outdoors. He loved going hunting for white-tailed deer and hunting wild rabbits in his youth. During the winter months, he would take his snowmobile out from the break of dawn until midnight. You could often catch him having a cold beer at his firepit and just enjoying the moment. He will be greatly missed by his whole family. Chuck is survived by his former spouse, Debra (Sayles) Ferguson; his son, Lyndon “Chuck” (Rochelle McFarlane) Ferguson, Jr. of St. Ignace; his daughter; Sherry (Terry) Cece of Brevort; grandchildren, Tayler Ferguson (Kevin Stokes) of Moran, Toby Ferguson of St. Ignace, Teagan Ferguson of Moran, Jared and Allison Cece of Brevort; great-grandchildren, Brysen and Kendrah Stokes of Moran; sisters, Charlotte Parrish of Tennessee, Azile (Bob) Price of St. Ignace, Debra Fisher of Mackinac Island; brothers, Ernest (Michelle) Ferguson Jr. of Owosso, Joseph Ferguson of Florida, Bernard Ferguson of Kinross and Michael Ferguson of New Jersey; as well as many nieces and nephews from Michigan, Ohio, California, Florida, Oklahoma, Kentucky, and Tennessee. Chuck is preceded in death by his parents, Ernest and Ella Mae; brother, James Ferguson and sisters, Margaret Davenport and Barbara Murphy; niece, Mary Jo Braun; brother-in-laws, Charles Davenport, Carl Murphy, William Fisher and Jay Parrish. A Memorial Service will be held in summer of 2022 to honor Chuck’s memory. Chuck will be buried at St. Ignatius Loyola Catholic Cemetery in St. Ignace next to his parents. Galer Dodson Funeral Home & Cremation in St. Ignace, Michigan, is serving the family. Condolences may be sent to the family at www.galerfuneralhomes.com.

Lyndon &#8220;Chuck&#8221; Charles Ferguson Sr., age 70, of St. Ignace, Michigan, passed away on January 20, 2022, at Mackinac Straits Hospital after a short battle with cancer. He was born in his childhood home in St. Ignace on October 12,... View Obituary & Service Information

The family of Lyndon "Chuck" Charles Ferguson Sr created this Life Tributes page to make it easy to share your memories.