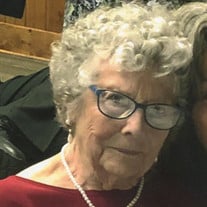 Marion Hessel Law, age 90, of Cedarville, Michigan, died September 14, 2020, in Sault Ste. Marie, Michigan. She was born February 16, 1930 in Flint, Michigan, to George Francis and Kathryn (Irvine) Gill. Marion lived in Flint until the age of 16 when her family moved to Cedarville. She graduated from Cedarville High School. She married Carl John “Johnny” Hessel and they raised three children and owned and operated their excavating business for nearly 20 years. After an accident at work left Johnny disabled, Marion worked for eleven years as an assistant in a local doctor’s office doing everything from answering the telephone to taking x-rays and drawing blood. She married Jack Law in 1982 and they were together until his death in 1997. Since age 17, Marion has been active in the Hessel Presbyterian Church. She was also a member of the Law-White VFW Auxiliary, Eastern Star, and the Les Cheneaux Historical Society. She served on the Mackinac County Jury Board for 20 years and was the chairman for many of those years. Marion enjoyed quilting and was a member of quilting guilds in both Sault Ste. Marie and Cedarville. She was a basket weaver for over 40 years and was honored by the American Basket Association for her longtime membership. She also enjoyed the local Basket Guild. In addition to quilting and basket weaving, Marion also enjoyed reading, ceramics, and sewing. Marion is survived by two sons, John Edward (Denise) Hessel of Hessel, Michigan, and Carl Francis (Jill) Hessel of Cincinnati, Ohio; daughter, Kathryn (Bill) Mudloff of Cedarville; grandchildren, Joshua John (Keri) Hessel, Angeline Mari (David) Dunn, Andrew Hessel, Cassandra Hessel, Michael John (Zulfia) Hessel, William Arthur (Brandy) Mudloff, and Amanda Kate Mudloff; and many great grandchildren. She is also survived by one sister, Gladys (Rob) Gavon of Pennsylvania; and one brother, James Richard “Jim” Gill of Cedarville. Marion was preceded in death by her first husband, Carl John Hessel; her second husband, Jack Homer Law; grandson, Gary Hessel; sister, Lillian (Richard) Jennings; and sister-in-law, Katherine Gill. Services will be held Friday, September 18, at R. Galer Funeral Home, 24549 S M-129 in Pickford, Michigan. Visitation will be held from 10:00 AM until 11:00 AM followed by a funeral service beginning at 11:00 AM. Burial will be at Cedar Edgewood Cemetery in Cedarville. Memorials may be left to Cedar Cove Activities Committee, PO Box 580, Cedarville, MI 49719. Condolences may be sent to the family at www.rgalerfuneralhome.com.

The family of Marion Hessel Law created this Life Tributes page to make it easy to share your memories.

Send flowers to the Law family.