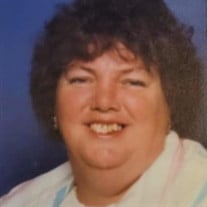 Mary Irene (Lumbert) Crisp of Rudyard, Michigan, died on April 6, 2022, at MyMichigan Medical Center in Sault Ste. Marie, Michigan, at the age of 74. She was born on November 15, 1947, in Ionia, Michigan to Kenneth and Doris (Daggett) Lumbert. Mary moved to Lansing, Michigan, with her family as a young girl and attended high school there. She worked at a few department stores for a year after school. It was during this time that she met Arthur Glen Crisp while he was working at the local gas station. They married on February 5, 1966, in Mason, Michigan and began their family. Mary became a stay-at-home mother to her four children and the family moved to the Upper Peninsula. Once her children were adults and out of the house, she did some security work at the local casino but always made time for her grandchildren. Mary was a member of the Rudyard Baptist Church. Mary had a talent for crafts and enjoyed sewing, knitting and crocheting. She also spent time gardening and watching the bird that would visit her home. She enjoyed spending her downtime playing games on her computer and watching her grandbabies. She enjoyed all life had to offer and will be greatly missed. Mary is survived by her husband of fifty-six years, Arthur; children, Arthur (Brenda) Crisp Jr. of Rudyard, Kevin (Ilean) Crisp pf Rodney, Michigan, Tracy Peffers of Brimley, Michigan and Heather (Bob) Derrick of Laingsburg, Michigan; grandchildren, Teresa, Kenneth, Leanna Chelsey, Susan, Bobby, Sara, and Savanna and Billy; five great grandchildren; siblings, Stanley and Ida, as well as many other cousins and nieces and nephews. Mary is preceded in death by her parents, Kenneth and Doris, mother-in-law, Lulla Williams, and brother, Bill. A graveside service at Fairview Cemetery is planned for Sunday, May 15, 2022 at 2:00 PM with Pastor Steve officiating. Galer Funeral Homes & Cremation, of Pickford, Michigan, is serving the family. Condolences may be sent to the family at www.galerfuneralhomes.com

Mary Irene (Lumbert) Crisp of Rudyard, Michigan, died on April 6, 2022, at MyMichigan Medical Center in Sault Ste. Marie, Michigan, at the age of 74. She was born on November 15, 1947, in Ionia, Michigan to Kenneth and Doris (Daggett) Lumbert. Mary... View Obituary & Service Information

The family of Mary Irene Crisp created this Life Tributes page to make it easy to share your memories.

Send flowers to the Crisp family.