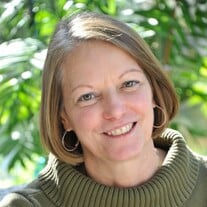 Mary Rose Maurer, 69, of St. Ignace passed away peacefully early Thursday, December 31, 2020, following an eight-month battle with cancer. She was born May 4, 1951, in Detroit to Michael and Rosemary (nee Mocarski) Maximiuk and attended Greenfield Park elementary school before the family moved to Walled Lake and she was graduated from Walled Lake High School in 1969. In high school, she enjoyed participating in the cave exploration club. She was graduated from Michigan State University in 1973 with a Bachelor of Science degree in Resource Development and where she met her husband, Wesley H. Maurer, Jr., in differential calculus class. They were married September 18, 1971 in Warren. The Maurers celebrated the 50th anniversary of their first date December 7, 2020 and would have been married 50 years in 2021. They moved to Mackinac Island in 1973 to work on the Mackinac Island Town Crier, owned by her father-in-law, and moved to Cedarville in 1975 after the family purchased the Les Cheneaux Islands Weekly Wave and also the Republican-News and St. Ignace Enterprise, later renamed The St. Ignace News. Mary and Wesley became sole owners of the mainland publications in 1980 and of the Mackinac Island Town Crier in 1995, and Mary Maurer served as associate publisher and business manager of the entire operation, Maurer Publishing LLC. On Mackinac Island and in St. Ignace, Mary was active in women's volleyball and played in the St. Ignace women's softball league and amateur tennis team at Petoskey, affiliated with the United States Tennis Association. Mary was also in the first Emergency Medical Technician graduating class in 1974 for the Mackinac Island Ambulance Corps and in St. Ignace she was an active member of the community theater group, Playcrafters. She served on the board of Mackinac Associates from 2003 to 2012. At the time of her passing, Mary was a member since 1985 of the St. Ignace Library Board, serving as president in 2011; St. Ignace Community Foundation since 1999, serving as president from 2001 to 2004; Mackinac Straits Health System trustee since 2013, and, since 2015, Superior Health Foundation in Marquette, which funds unmet healthcare needs, research, education, and prevention programs throughout the Upper Peninsula, and on which she was an integral member of the grants committee. She was also a member of the Mackinac Island Yacht Club, Wawashkamo Golf Club, Mackinac Associates, St. Ignace Yacht Club, the St. Ignace Chocolate Society, and through the business, a host of civic organizations. "Mary was a perfect friend, lover, traveling companion, and business partner," said her husband, Wesley. "She was determined, smart, and witty. She had compassion for all things small and vulnerable, be it a hungry squirrel or kitten, a sprouting plant or flower, or a child. Over 50 years of growing together and learning from each other, we shared admiration and respect and loved every adventure, whether traveling to a distant city or across town to a store. We just really liked being together." In addition to her husband, she leaves five siblings and their families, Madeline Maximiuk of Macomb, Michael Maximiuk of Deckerville, Marlene and James Hoydic of West Branch, Marilyn and Carl McCauley of West Branch, and Maureen and Tim Clark of Warren; two sisters-in-law and their families, Margie Shelton of Pinckney and Marilyn and Michael Baker of Dublin, Ohio, and many nieces, nephews. She was preceded in death by her parents. A service will be planned later, as the pandemic permits. Burial will be on Mackinac Island. Memorials can be made to the St. Ignace Community Foundation, Mackinac Straits Health Foundation, or charity of choice.

The family of Mary Rose Maurer created this Life Tributes page to make it easy to share your memories.

Send flowers to the Maurer family.