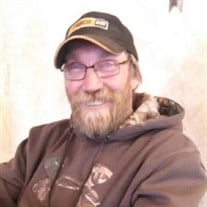 Melvin “Mike John” Piippo, age 62, of Rudyard, Michigan, passed away on December 19, 2021, at War Memorial Hospital in Sault Ste. Marie, Michigan. He was born on November 3, 1959, in Sault Ste. Marie to parents, Melvin Harold and Lempi “Ellen” (Wuorie) Piippo. Mike John grew up in Rudyard and graduated from Rudyard High School in 1978. He married his high school sweetheart, Terry Lynne (Willard) Piippo, on May 8, 1982, in South Carolina. He then started welding and working at a feed mill for a short time before starting his business, Titan Timber in 1983. Mike spent the majority of his working life operating his business and working on the family hay farm. Mike John was a member of the St. James Lutheran Church in Rudyard, as well as a member of Michigan Association of Timberman and Future Farmers of American. In his free time, Mike spent time playing in his band, Second Offense. He had first started playing in 1978 when he started the band, Borrowed Time. He was a natural drummer and very talented and played for over fifty years. He also raced snowmobiles for the last twenty years. He loved fishing, golfing and hunting, but most of all, he loved spending time with his family and grandchildren. Mike was many things in life but above all, he was a beloved family man. Mike John is survived by his loving wife, Terry; son, Jeremie (Lacey) Piippo of Rudyard; daughter, Sarah (Thomas Curtis of Pickford, Michigan; grandchildren, Spencer, Sadie, Andrew, Lexxi, Emery, Clara, Tommy Jr. and Maaila; brother, Clint (Alice) Spring of Rudyard; sister, Amy Piippo of Rudyard, as well as many nieces, nephews and life long friends. Mike John is preceded in death by his parents, Melvin and Ellen; stepmother, Marge Piippo; sisters, Kathy Blalock; and Karen (Ron) Royer. Services will be held Tuesday, December 28, 2021, at Galer Funeral Homes & Cremation, 24549 S M-129 in Pickford. Visitation will be held from 11:00 AM until 2:00 PM followed by the funeral service at 2:00 PM. A dinner and fellowship will be held at the Rudyard Township Hall following the funeral service. Final resting place will be in North Rudyard Township Cemetery.

The family of Melvin "Mike John" Piippo created this Life Tributes page to make it easy to share your memories.

Send flowers to the Piippo family.