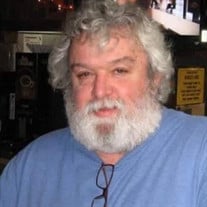 Michael “Mick” W. Campbell of Mackinaw City, Michigan was born on March 27, 1958, to parents James “Jim” and Shirley Campbell. Mick died peacefully on April 23, 2022, at the age of 64 with family by his side under hospice care at McLaren Hospital in Petoskey, Michigan, after a lengthy illness. With his huge sense of humor and laid back disposition, Mick was forever friends with whomever he met. He will be missed by all who knew and loved him! Mick is survived by his wife, Tracey (Clark) and his son, Jackson of Mackinaw City; big brother, Bob, "Soup" and wife Tish and family of Ishpeming, and big sister, Kim and husband Dan and family of Marquette along with numerous aunts, uncles, nieces and nephews, and great nieces and great nephews. Mick was preceded in death by his mother and father, Jim and Shirley Campbell, his baby sister Candy; and brothers, Bill and Steve Campbell. Future celebrations of Mick's life will be announced at a later date. Galer Funeral Homes & Cremation, of Pickford, Michigan, is serving the family. Condolences may be sent to the family at www.galerfuneralhomes.com.

The family of Michael W Campbell created this Life Tributes page to make it easy to share your memories.

Send flowers to the Campbell family.