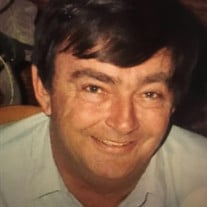 Neil Salisbury, age 86, passed away quietly on Thursday, January 6, at the Cheboygan Medilodge. Neil was born on December 14, 1935, in South Bend, Indiana, to Edward and Dorothy Salisbury. Neil met his wife, Millie Becker, during the construction of the Mackinac Bridge. Together they raised three children, who he is survived by, two daughters, Marci and Mike Bishop of St. Ignace, Joni and Mike Grogan of Moran, and a son, Ed Salisbury of Charlevoix. Neil is also survived by three grandchildren, Lindsay Bishop (Jeremy Vesper), Neil Salisbury (Hannah), and Nick Grogan, as well as three great-grandchildren, Sophie, Gracie, and Warren Salisbury, and his sister Becky Micko and family. Neil was preceded in death by his parents, Edward and Dorothy Salisbury and sisters, Elaine, Linda, and Geraldine. Neil enjoyed many activities during his lifetime. He was an avid reader until his death and loved to fish, especially for trout. He enjoyed time spent with his family, building, and flying model airplanes and loved apple pie, a good steak cut 1 1/4” thick, fried bologna sandwiches and oyster stew. Neil was an iron worker by trade, following in his father’s footsteps. He was a life-long member of the Ironworkers Union Local 340. He was a hard worker and dedicated to his profession. Neil worked for American Bridge and Bethlehem Steele for many years as a “pusher” (foreman) of a raising gang and his love for watching the steel go up, remained with him throughout his life. He was highly sought after as an iron worker and worked on many buildings and bridges, some of which include the International Bridge, Mackinac Bridge, Golden Gate Bridge, St. Louis Archway, and the John Hancock building to name just a few. Neil’s work took him to many places, but he always considered Moran to be his “home.” He loved spending time there whenever he could and loved fishing trips to the Two Hearted River and visiting the Pine Stump Junction with his brother-in-law, Pete Langstaff, who preceded him in death. Neil’s larger than life personality and wit will be greatly missed by all those who knew and loved him. A graveside service will take place in the spring, and he will be laid to rest at the Immaculate Conception Cemetery in Moran. Galer Funeral Homes & Cremation in Pickford, Michigan is serving the family. Condolences may be sent to the family at www.galerfuneralhomes.com.

Neil Salisbury, age 86, passed away quietly on Thursday, January 6, at the Cheboygan Medilodge. Neil was born on December 14, 1935, in South Bend, Indiana, to Edward and Dorothy Salisbury. Neil met his wife, Millie Becker, during the construction... View Obituary & Service Information

The family of Neil Salisbury created this Life Tributes page to make it easy to share your memories.

Send flowers to the Salisbury family.