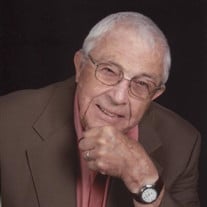 Neill Hodges Nutter, age 89, of Cedarville, Michigan, died on October 3, 2020. He was born on June 18, 1931 to parents Lance Nutter and Irma Neill in Pontiac, Michigan. Neill grew up in the Pontiac area of Southern Michigan. He graduated... View Obituary & Service Information

The family of Neill Hodges Nutter created this Life Tributes page to make it easy to share your memories.