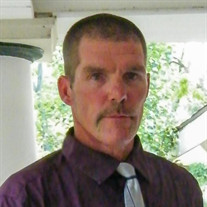 Patrick (Pat) Brian Abbott, age 58, of Hessel, Michigan, died on February 8, 2022, at his home. He was born on August 12, 1963, in St. Johns, Michigan, to George Nicholas and Patricia Mae (Lewis) Abbott. Patrick grew up in Maple Rapids, Michigan and graduated from Fulton High School. He worked in construction most of his life, starting in 8th grade working with his grandpa. Right after high school graduation, Pat moved to Grand Rapids and began working for a construction company there. He later moved to St. Ignace, Michigan to work construction on Mackinac Island for five years before settling in Hessel, continuing to work construction before his health forced him to stop. Patrick was a member of the United Brotherhood of Carpenters and Joiners of America, Local UBC00202. Patrick loved fishing, hunting, and watching the deer and birds in his yard. Pat was an avid sports fan and loved his heavy metal music. In his younger years, he liked to play baseball and ride snowmobile. Patrick is survived by his son, Jonathon P. Abbott of Colorado Springs, Colorado; grandson Evan Abbott; mother, Patricia Abbott of Maple Rapids; sister, Georgiana Norris of Muskegon, Michigan; and many nieces and nephews that he adored. Patrick also had a U.P. family of neighbors, friends and their children for whom his family under the bridge will always be grateful. Patrick was preceded in death by his father, George; brother, Jonathon N. (Nick) Abbott; brother-in-law, Ken Norris; grandparents, Aubrey & Helen Lewis and George and Doris Abbott. A Celebration of Life will be held on February 26, 2022, from 11:00 A.M. till 1:00 P.M. at Galer Funeral Homes, in Pickford, Michigan. The Memorial Service will follow at 1:00 P.M. Final Resting place will be at Sowle Cemetery in Essex Twp., Michigan. In lieu of flowers, donations to your local humane society in Pat’s name. Condolences may be sent to the family at www.galerfuneralhomes.com.

The family of Patrick Brian Abbott created this Life Tributes page to make it easy to share your memories.

Send flowers to the Abbott family.