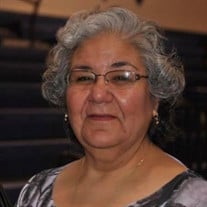 Penny Candice (Cameron) Leapley, 65, of Bay Mills, Michigan, died on Monday November 23, 2020 at War Memorial Hospital in Sault Ste. Marie, Michigan. Penny was born on April 27, 1955 at her home in Bay Mills, Michigan to Harold and Marie Cameron, Sr. She had nine siblings, six brothers and three sisters. Penny married her husband of 47 years, Charles Leapley, Sr., on February 3, 1973. Their marriage brought his three children, Kim, Alphonse, and Tony into her life, and soon they were joined by their siblings Jackie, Beth, Charlie, and Candice. Since she was a young girl, Penny spent most of her life caring for and loving children, starting with her baby sister. She dedicated almost all of her life to working with children, starting with a community day care in Bay Mills. Afterwards, her path led to her position as a paraprofessional at Brimley Area Schools where she stayed for thirty years until her retirement. Knowing her passion for children, her daughters convinced her to give up retirement and apply for the Bay Mills Child Development Center. It was there that she became known as the “baby whisperer,” and her magic touch reached many families throughout the community. All the children who came through the baby room were “her babies.” With a joyous laugh, warm eyes, and a gentle hug, she became a grandma to so many, and over the years, Miss Penny had a hand in the development of countless children. Penny was an accomplished seamstress and an experimental cook who often wanted to try new recipes. She enjoyed reading, watching her shows and old movies, and writing things down. Penny loved music, and she always took advantage of each moment she had to dance in her husband's arms. But above all else, Penny loved spending time with her family and being a mom and a grandma. Nothing filled her heart more than being a “Niin.” Penny is survived by her husband, Charles Leapley, Sr.; her children, Elizabeth (Brian) Hill, Charles (Rachel) Leapley, Jr., Candice (Jacques Jr.) LeBlanc; her stepchildren, Kimberly Leapley, Alphonse (Bunnie) Leapley, and Anthony (Camie) Leapley; her grandchildren, Brandon, Blake, Christina, Alicia, Josh, Alphonse, Seth, Shelby, Vanessa, Cassie, Karen, Albert, Cameron, Jolie, Bryana, Alec, Grace, Lindsey, Jacques III, Perry, Reginald, Jacqueline, and Jade; her many great-grandchildren, including her special little sweetheart Elias Albert. She is also survived by her brothers, Darryl (Edith) Cameron, Norman (Eileen) Cameron, and Joel Cameron; and brothers-in-law Bob (Betty) Leapley and Larry (Sue) Leapley; her sister Carol (Chris) Carrick and her sisters-in-law Corrine Cameron, Jessie Cameron, and Barbara Monticenos. Penny was preceded in death by her parents Harold and Marie Cameron, Sr and her father and mother-in-law Harold and Margaret Leapley; her beloved daughter Jacqueline Leapley; her brothers, Harold “Jr.” Cameron, Aaron “Bill” Cameron, and Arnold “Hawk” Cameron; brothers-in-law, Ronald Leapley, Raymond Leapley, and Richard Leapley; and her sisters Leola Calder and Carrie Cameron. Visitation will be Friday, November 27, 2020 from 1:00pm until 3:00pm at St. Kateri Tekakwitha Catholic Church in Bay Mills, MI. Mass of Christian Burial will be Friday November 27, 2020 at 3:00pm at St. Kateri Tekakwitha Catholic Church with Father Romeo Cappella officiating. Burial will take place this spring at Mission Hill Cemetery in Bay Mills, MI.

The family of Penny Candice Leapley created this Life Tributes page to make it easy to share your memories.

Send flowers to the Leapley family.