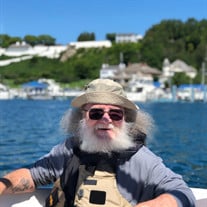 Peter “Pete” Alan Black, age 70, of St. Ignace, Michigan, died January 1, 2022, at home. He was born July 2, 1951, in Evergreen Park, Illinois, to Peter Black Jr. and Rose Ann (Mooney) Black. Pete grew up on the southside of Chicago. He was very proud of his Scottish Heritage, being the first born in the United States as his parents were from Scotland. He has many family members who enjoy getting together for family gatherings as well as those who still live across the pond. Pete was a SGT in the United States Army and was proud of having served during the Vietnam War. He met his wife Teri where they both worked for Ill Bell. They were married in August of 1982. Pete loved the outdoors. He was an avid sports fan, especially his Chicago Bears and White Sox. He was active in the Ill Bell softball teams. He loved his pets with Thistle being his current fur baby. Fishing was his great pass time. He also loved woodworking and building things for Teri or the house. He was known to say, his job in life was to make Teri happy. She was the love of his life, and he was also the love of her life. They traveled extensively and enjoyed life. Pete retired in 1999 from Ill Bell with 30 years of service. Upon retiring, Pete and Teri bought some land in New Mexico’s high desert and settled there. He said he learned to appreciate his steaks after seeing the work involved in raising cattle. Seven years and many friends later, they moved to San Antonio, Texas, where he became a school bus driver. He was well liked by his students and co-workers, many of whom remained in contact with him. Pete and Teri made one last move eight years later to settle in St. Ignace, Michigan, Teri’s ancestral town, and again making more friends. He lived a happy life in St. Ignace. Pete and Teri had no children of their own, however, they raised a nephew, Jason Jenkins, whom he was very proud of. He was proud of all 24 nieces and nephews as well as the next generation of 27 great nieces and nephews. He will be sorely missed by all. Pete is survived by his wife, Teri; siblings, William K. Black and Deborah R. (Barry) Semenec, both of Palos Heights, Illinois; brothers-in-law, Michael (Elise) Jenkins of San Francisco, California, and David (Roberta) Jenkins of Darien, Illinois; and sister-in-law, Maria (Thomas) Nelson of Mapleton, Illinois. Pete was preceded in death by his parents and his brother-in-law, Royal Frank Jenkins. Final resting place will be at St. Ignatius Cemetery. Galer Dodson Funeral Home & Cremation in St. Ignace, Michigan is serving the family. Condolences may be sent to the family at www.galerfuneralhomes.com.

The family of Peter "Pete" Alan Black created this Life Tributes page to make it easy to share your memories.