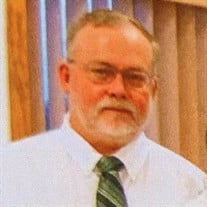 Richard “Rick” Lauri Maki Jr., age 64, of Kincheloe, Michigan, died on January 16, 2022, at War Memorial Hospital in Sault Ste. Marie, Michigan. He was born in Newberry, Michigan on March 25, 1957, to Richard L. Sr. and Sylvia A. (Maki) Maki. Rick spent his youth in Newberry before moving to Sault Ste. Marie as a teenager and attending Sault High School. After graduating high school in 1975, he attended college and joined the US Army. He would later pursue a career in Criminal Justice as a Corrections Officer for the State of Michigan Corrections Department. After starting his employment in Kincheloe, he met Stephanie Ann Pudelko during a “picture” date. They married on August 1, 1998, in DeTour, Michigan. Richard retired from Corrections in 2011. Rick truly loved his family, especially his children. He was a great husband, father, brother and friend. He was always telling jokes and laughing. His favorite saying was, “This too Shall Pass” which after twenty-four years of hard work, proved to be true. He enjoyed spending time outdoors and visiting his property in DeTour. He enjoyed cooking, welding, four wheeling, reading & telling stories, and spending time with his wife and family. He absolutely loved listening to his HAM Radio, call # KD8KYA “Signing off”. Rick was a great man who will be missed by many. Rick is survived by his wife of twenty-four years, Stephanie; children, Tim (Wendy) Maki, Michael Maki, Amanda (Gary) Berkompas, Rosanna (Blake) Pollock, and Bethany (Jordan Frey) Robinson; grandchildren, Isabella, Savannah, Zachary, Avalon, and Oliver; his father, Richard L. Maki Sr.; sister, Sharon (Elmer) Spencer; niece, Christina (Dan) LaFrancis; father & mother-in-law, Raymond & Dorothy Pudelko; as well as many other beloved family members and friends. Rick was preceded in death by his loving mother, Sylvia Maki; sister, Shirley; best friends, Steve Severance and Al Pierson; and his beloved dog, Bowser. No services are planned at this time. Galer Funeral Homes & Cremation in Pickford, Michigan is serving the family. Condolences may be sent to the family at www.galerfuneralhomes.com.

The family of Richard "Rick" Lauri Maki Jr created this Life Tributes page to make it easy to share your memories.

Send flowers to the Maki family.