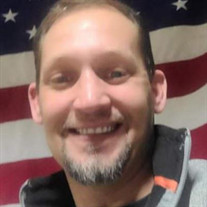 Richard “Scott” Turner, age 49, of McMillan, Michigan, died in McMillan, Michigan, on January 13, 2022. He was born on April 29, 1972, in Melvindale, Michigan, to Richard and Joyce (Smith) Turner. Scott lived in Detroit, Michigan, where he married his first wife, Jennifer Copeland, in the 90’s and eventually had three children. After his divorce, Scott continued to live in Detroit and worked for General Motors for 10 years, until 2000 when met Bridget Caswell during a visit to the Upper Peninsula. They married on May 11, 2001 and gained a daughter. Scott worked seasonally for his father-in-law at JC Roofing in Newberry. He worked a couple years at Redi Mix and Crittenden Construction before he earned his CDL and began working for Tony Bazo out of Detroit as a truck driver. In 2018, Bridget and Scott created their own business together and continued to serve the Upper and Lower Peninsula. In 2020, he expanded his career to working on automobiles and salvaging for a solution to the pandemic crisis. Scott was an intelligent, and considerate entrepreneur. He always was thinking of his family, friends, and his future. He loved to listen to music, especially when he played his guitar and sang. Enjoyed riding his motorcycle, spending time with his wife, Bridget, as well as his friends and family, especially his grandchildren. He often spent time traveling, camping, rebuilding his motorcycle and truck, walking his dog, and playing cards games with his friends and family. Scott is survived by his wife, Bridget Ann Turner; sons, Michael Turner of Gaylord, Michigan, and Chad Turner of Luzerne, Michigan; daughters, Emily Turner of Mio, Michigan, and Zoey Tyner of McMillan, Michigan; sisters, Cynthia Halter of Taylor, Michigan, Shaunna Bunch of Taylor, Michigan, Cheryl Kimes of Taylor, Michigan, Leslie Sturm of Chattanooga, Tennessee, and Sandra Clark of Taylor, Michigan; half-sister, Charolette Peacock of Georgia; brother-in-law, Walter Caswell of Newberry, Michigan; sister-in-law, Cassie Caswell of Newberry, Michigan; and his grandchildren, Milo, Harley, Conner, Christen, Rayanna, and Timothy. Scott is preceded in death by his mother, Joyce Ann (Smith) Turner; his father, Richard Eugene Turner; and his granddaughter, Hadley Mae Turner. Galer Funeral Homes & Cremation in Pickford, Michigan is serving the family. Condolences may be sent to the family at www.galerfuneralhomes.com.

The family of Richard “Scott” Turner created this Life Tributes page to make it easy to share your memories.

Send flowers to the Turner family.