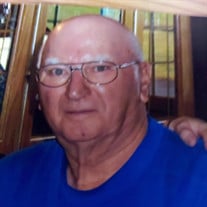 Robert Hazen Ball, age 85, of Hessel, Michigan, died on December 6, 2020 in Pickford, Michigan. He was born on October 3, 1935 to Lorenzo and Mary (Shupe) Ball in Milwaukee, Wisconsin. Robert and his family moved to Sault Ste. Marie, Michigan during World War II for war job opportunities. He began working for Weir Moving and Storage and later with the encouragements of Kenny Weir, started his own company, Ball Moving and Storage. He also began Superior Sanitation as well as bus services in two cities, Sault Ste. Marie and Marquette. He married Helen Bumstead in 1953 in Rosedale, Michigan. Together they raised three children in Sault Ste. Marie. In 1977, he semi-retired and moved to Zephyrhills, Florida where he and Helen purchased and operated a 425-site travel trailer park. He always returned to the Sault Ste. Marie area in the summer months. Later on, he bought a summer home in Hessel and became a “Snowbird”. Robert was a member of the Immanuel Lutheran Church in Sault Ste. Marie and the Elks Lodge. Robert enjoyed buying, selling, collecting, and restoring antique vehicles such as Packard cars and Reo and International Trucks. He also enjoyed hunting season and the chance to cook up a big pot of his famous chili. He loved to take a Sunday drive just to see the area, then stop and get a bite to eat. He also enjoyed getting to know people personally. Robert is survived by, Helen; children, Nancy (Carl) Bahs of Marietta, South Carolina, Donna (Wendell) Johnson, of Zephyrhills, Florida, and Robert A. (Susan) Ball, of Hessel, Michigan; grandchildren, Elizabeth (Remi) Bahs-Wheeler, Eric (Rachel) Bahs, and Emily (Curtis) Snyder; five great-grandchildren; brother, Ralph (Joann) Ball of Lansing, Michigan; and sister, Mary Ellen Cila of North Carolina. Robert was preceded in death by his parents; brothers, Tom, Donald, Larry, David, Norman, and Sydney Ball; and sister, Gloria Nolte. Robert’s final resting place will be at Oaklawn Chapel Gardens A special thank you to Robert's God son, Norman Ball and his wife Twyla, for their years of love and caring for Robert and Helen. You are so appreciated.

The family of Robert Hazen Ball created this Life Tributes page to make it easy to share your memories.

Send flowers to the Ball family.