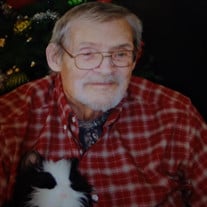 Robert “Bob” Gordon Konings Sr., aged 84, of DeTour Village, passed away on January 18, 2022, at War Memorial Hospital in Sault Ste. Marie, Michigan. He was born on March 1, 1937, in Waupun, Wisconsin to parents Gordon and Ruth Konings. Bob spent his youth in the state of Wisconsin where he attended school. He began working at a Cream Corn Factory after school and moved to Michigan in 1964 to start work in the logging industry. He married his loving wife, Sandra Lea (Adams) Konings on October 17, 1965, in DeTour Village. His main job and other love was being a Captain on the DeTour Pilot Boat, from which he retired. He also worked on a fishing boat for Dutcher’s Fisheries along with doing some bartending for Fred’s bar. Bob loved watching old Western Films and having bon-fires in the back of his property. He enjoyed going out hunting and fishing in his free time. Bob is survived by his daughters, Belinda (Ed) Posto of Newport Ridge, Florida, Becky O’Brien, Bridgett Kazolo, and Janet (Dan) DeMerse of DeTour, Michigan; son, Robert Konings Jr. of Drummond Island, Michigan; grandchildren, Cindy and Crystal (Dale) Bosley; sisters, Debra (Roger) Bourros of Wisconsin, and Diane (Mike) Konings Erikson of Arizona; along with many beloved nieces and nephews. Bob is preceded in death by his wife, Sandra; and his parents. Galer Funeral Homes & Cremation in Pickford, Michigan is serving the family. Condolences may be sent to the family at www.galerfuneralhomes.com

The family of Robert "Bob" Gordon Konings Sr created this Life Tributes page to make it easy to share your memories.

Send flowers to the Konings family.