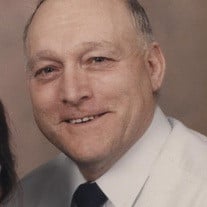 Robert Wayne Fountain, age 87, of Cedarville, Michigan, passed away peacefully on October 8, 2021, surrounded by family at Cedar Cove Assisted Living. He was born on August 22, 1934, to Harvey and Grace Fountain. Bob was in the United States Army Reserve from September 1956 to March 1961. He also was a union carpenter and worked on the Mackinac Bridge, the International Bridge, Soo Carbide, Soo Alqonquin Tannery, and U.S. Limestone before purchasing Fountain Transfer. He and Mildred owned and operated their business for 45 years before passing it over to their son Randy, who still operates it today. His other son Mark and daughter JoAnne also followed their father in the U.S. Mail Delivery service. Bob met the love of his life, Mildred Gustafson and they were married on August 11, 1956. Together they built their home on Rockview to raise a family and run their business. They semi- retired and spent winters in Port Charlotte, Florida for over 30 years to be near their daughter and family. Since Mildred's passing in March 2019, Bob has lived with his son Steve (Kathy) during winters in Florida, and summers in Cedarville at Cedar Cove. Bob And Mildred enjoyed summers at their cottage on Hill Island where they had many picnics and made many memories with children and grandchildren. As a retired mailman he was always comfortable riding around the countryside checking out things and stopping at garage sales for bargains. He was a great influence on his children, grandchildren, and great grandchildren. He was an easy soul to be around, and loved to share his knowledge about building, remodeling, cement work, wood cutting, and financial investing. He taught his children and grandchildren how to save a dollar and how to invest one too. Whenever there was a need, he could get a crew together and get the job done. He was a great role model, with a big heart and a big smile and was always available to help where needed without praise or acknowledgement. Bob is survived by his four children, Steven (Kathy) Fountain of Cedarville, MI, Mark (Pam) Fountain of Saginaw, MI, JoAnne Brown of Port Charlotte, FL, and Randy Fountain of Cedarville, MI; eleven grandchildren and eighteen great-grandchildren, Jaime (Todd) Moran (Grace, Aubrey, & Jack), Jeffrey (Stephanie) Fountain (Lucy), Jordan (Erin) Fountain (Everly & Milly), Justin (Cheyenne) Fountain (Lakelyn, Hudson, & Aspen), Jeremey Chartrand (Tristan & Aiden), Jessica (Neal) Clunie, (Calvin, Alaina, & Madison), Jim Bob and Jeremy Brown, Martha June (Jason) Bassett (Alyssa & Dylan), Jacie (Jeff) Stocking, Jason (Rachel) Fountain (Faolon & Niamh). He is also survived by his brother, Dave (Terry) Fountain of Jacksonville, FL; and sister-in-law, Bunny Gustafson of Grand Rapids, MI. Bob was preceded in death by his parents, Harvey and Grace Fountain; wife, Mildred E. Fountain; infant brother, Jimmy Fountain; sister, Harvetta Fountain; brothers and sisters-in- law, Roger and Corrinne Fountain, Richard Gustafson, Ray and Dorothy Cruickshank; and son-in-law, James Brown. Bob is to be cremated and laid to rest with his wife in Oaklawn Chapel Gardens. There will be a memorial for family and friends at his cottage on Hill Island in July of 2022. Memorial contributions may be made to Cedar Cove Assisted Living, 266 S. Mary L St., Cedarville, MI 49719 or McLaren Hospice, 722 South St, Cheboygan, MI 49721.

Robert Wayne Fountain, age 87, of Cedarville, Michigan, passed away peacefully on October 8, 2021, surrounded by family at Cedar Cove Assisted Living. He was born on August 22, 1934, to Harvey and Grace Fountain. Bob was in the United States... View Obituary & Service Information

The family of Robert Wayne Fountain created this Life Tributes page to make it easy to share your memories.

Send flowers to the Fountain family.