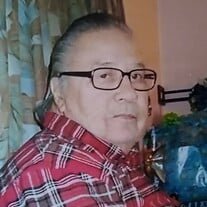 Roger Albert "Chocolate" Young, Sr., 80, of Sault Ste. Marie, MI, passed away peacefully at his home on Monday April 5, 2021. He was born July 19, 1940 on Sugar Island, MI. Roger moved to Hamtramck, MI in 1965 to work at Chrysler as a paint sprayer. After his retirement he moved back to the Soo area and was a driver for U.P.H.P and D.H.S. He was a member of the Sault Tribe of Chippewa Indians. Roger is survived by his wife of 55 years, Virginia Lee (Kisro) Young; daughter, Marie Lee (Young) Iser; sisters, Marie, Carol, and Jane; brothers, Willard Willis and Jerry Willis; grandchildren, Michael, Nichole, Britney, Kelly, Brandy, Frankie, and Linsey; and great grandchildren, Silas and many more. Roger is preceded in death by his parents, Roger Nicholas Young and Sophie Willis; sons, Roger Albert Young, Jr. and Roger "Chuck" Dale; daughter, Tammy Murphy; and brother, Ernest I. Young. He will be truly missed by all. Visitation will be at the Niigaanaagiizhik Ceremonial Building from Thursday April 8, 2021 at 10:00am until the time of Traditional Pipe Ceremony on Friday April 9, 2021 at 11:00am. Clark Hovie Galer Funeral Home assisted the family with arrangements.

The family of Roger Albert Young, Sr. created this Life Tributes page to make it easy to share your memories.

Send flowers to the Young family.