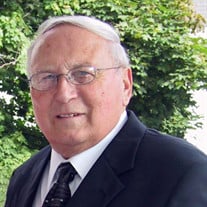 Roland Jr “Rollie” Hill, age 93, formerly of Pickford, Michigan, died on September 21, 2020, in Brooksville, Florida. He was born January 6, 1927, in Sterlingville, Michigan, to Roland Henry and Ethel (Gough) Hill. Rollie grew up in Pickford and graduated from Pickford High School with the Class of 1945. He served in the United States Army and then spent two years on the Great Lakes freighter Louis W. Hill (later renamed the Valley Camp). On April 7, 1949, Rollie married Audrey Thompson and they made their home in Pickford. He worked at the Pickford Meat Plant, the Kincheloe Air Force Base, and then, after the Air Force Base closed, he was the gardener at the Governor’s residence on Mackinac Island. After retirement Rollie and Audrey lived on Island 8 in Cedarville, Michigan, before moving to Lake Wales, Florida. After Audrey’s death in 1996, Rollie married Margaret “Margie” McDonald and they continued to live in Florida. Rollie enjoyed hunting, golfing, and going to basketball, football, and baseball games and track and cross country meets. He was an avid gardener always trying to grow larger pumpkins than Web Morrison and better carrots than Eldred Rye. Rollie is survived by his wife, Margaret; daughter, Karen Hill-Steiner of Sydney, Australia; sons, Darrell Hill of Ashburn, Virginia, and Dana Hill of Brooksville, Florida; seven grandchildren; thirteen great grandchildren; and sister, Arlene Hillock of Dafter, Michigan. Burial will be at Oaklawn Chapel Gardens in Bruce Township, Michigan.

The family of Roland Jr Hill created this Life Tributes page to make it easy to share your memories.

Send flowers to the Hill family.