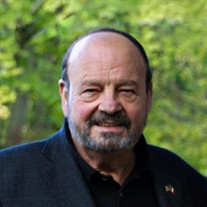 Ronald James Calery passed away peacefully at his home surrounded by his family on October 8th, 2020. Ron was born in Hamilton, Ontario, on March 26th, 1935. A graduate of Loretto Catholic Central in Sault Ste. Marie, Ron went on to earn his Bachelor and Master of Social Work degrees from Michigan State University. Prior to attending MSU, he served his country in the United States Marine Corp. Ron began his career in social work in 1964, serving as the branch office director of Catholic Social Services in Sault Ste. Marie, where he became involved in President Lyndon Johnson’s War on Poverty. He was the driving force in creating six Community Action Agencies in the Upper Peninsula, setting the model for rural communities, and served on the Board of Directors for the agency while also being involved in many other civic activities. In 1972, Ron joined the Chippewa Luce Mackinac Community Action Agency (CLMCAA) and became its Executive Director. Over the span of his career, Ron was a tireless champion who dedicated his life’s work to helping anyone in need. He advocated on behalf of senior citizens, children, Native Americans, veterans, and the homeless. Ron promoted senior and affordable housing development and established programs to address poverty and food insecurity throughout the Eastern Upper Peninsula. Developing the Sewell Avery Center was one of his most fulfilling accomplishments. He was strong in his belief that people deserved a hand up, not a handout in life, and that all people should have access to equal opportunities. Ron’s relentless pursuit of social justice made life better for thousands of seniors and families. Ron was dedicated to public service. He served as a Sault Ste. Marie City Commissioner, on the boards of statewide and national organizations, and was very active in creating recreational opportunities for youth. Ron was proud of his 32-years of service on the War Memorial Hospital Board of Trustees and really enjoyed his years volunteering as a youth hockey coach. A lifelong practical joker, Ron made a lasting impression on everyone he met. His quick wit, unique sense of humor and ability to make people laugh will long be remembered by the many people that loved him. Ron’s extraordinary life of service inspired all who knew him. He led with integrity, passion and an unwavering (and sometimes unreasonable!) commitment to lifting others up. Ron’s legacy will live on through the impact he made for others. Ron is survived by the love of his life, Reenie Butler Calery. His children were everything to him and his legacy will live on through Michael Calery (Angel Qin), Kathryn Calery Barr (Dan Arteritano), Rob Calery (Tawnya Johnston), Kristen Calery Corbiere (Justin Corbiere), Jennifer Calery (Stephen Werth), and Amy Frazier (Justin Frazier). His grandchildren brought great joy to his life. Blake Barr, Chelsea Sebert (Dakota Sebert), Lindy Calery, Lily Izzard, Kamryn Corbiere, Carter Frazier, Kacie Corbiere, Finn Frazier, Kali Corbiere, Sophia Calery and his great granddaughter Swayzii Sebert. Ron had a special connection with his sister Kathy Calery Sutter and brother-in-law Bill Sutter, as well as his nephews Bill (Alison) and Phil (Zsofia) Sutter and his niece Cynthia Ridley, sister Marilyn Simonini, nieces Valerie Nicholson and Cathy McDonald, brother-in-law and sister-in-law Rick and Nancy Butler, niece Cortney Butler and nephew Sean Butler (Erin). He had lifelong memories of his extended family in Sault, Ontario, including the Vena’s, the Peters, the Butkovich’s, the Gualazzi’s, and the Petroni’s. Ron was preceded in death by his parents George and Phyllis Calery, his brothers George and Bobby Calery and his in-laws Geraldine Bell and Larry Butler. A service will be held at St. Mary’s Catholic Church in Sault Ste. Marie, MI, on Friday October 16th at 12:00 p.m. with Father Nick Thompson officiating. Friends may visit at the Church from 9:00 a.m. until the time of the service. In lieu of flowers, the family requests donations to be made in Ron’s honor to Chippewa Luce Mackinac Community Action Agency. Ron’s final wish - Go Spartans and Vote Blue!

Ronald James Calery passed away peacefully at his home surrounded by his family on October 8th, 2020. Ron was born in Hamilton, Ontario, on March 26th, 1935. A graduate of Loretto Catholic Central in Sault Ste. Marie, Ron went on to earn his... View Obituary & Service Information

The family of Ronald James Calery created this Life Tributes page to make it easy to share your memories.

Ronald James Calery passed away peacefully at his home surrounded...

Send flowers to the Calery family.