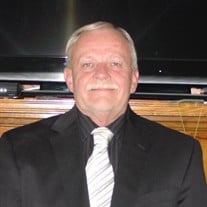 Ronald Joseph Coffey, age 77, of Rudyard, Michigan, died unexpectedly on November 15, 2021, at his home in Rudyard. He was born October 29, 1944, in Sandusky, Michigan, to Olin H. and Donna H. (Jacques) Coffey. Ronald spent his youth growing up in Detroit, Michigan. He moved to Louisiana for a short time with his brother, Larry Coffey, and visited Arizona before enlisting with the United States Air Force at the age of sixteen. He was stationed at the Kincheloe Air Force Base in Kinross, Michigan. It was during this time that he met the love of his life, Brenda Louise (Becker) Coffey. On September 24, 1966, they married at the Immaculate Conception Catholic Church in Moran, Michigan. The newly-weds moved to Duran, Michigan, where they started their family and had three sons, Ronald Dean, Leland Lewis and Scott Joseph. The family lived in St. Clair, Michigan, and Marine City, Michigan, before returning to the Upper Peninsula to raise their three boys surrounded by family. Ronald was a member of the Knights of Columbus, Chippewa County Shooting Association, and spent many years volunteering at the church as an usher. Ronald loved spending time outdoors hunting, fishing, and practicing his shooting. He spent many beloved times in the woods with his boys. He also attended many cowboy shooting events where he got his cowboy name, Whiskey Joe. He was known for his love of Glenfiddich Whiskey. During the winter months, Ronald would travel with his beloved wife Brenda. Ronald and Brenda traveled all over the United States together and made many memories over the years. Ronald was a talented outdoorsman and dedicated family man who will be missed by many. His dog Ruger became his faithful companion after his wife passed. You would never see Ron without his precious dog by his side. Ronald is survived by his children, Ronald Dean (Michelle) Coffey of Rudyard, Leland Lewis Coffey (Scott Bucacci) of Cleveland, Ohio, and Scott Joseph (Bridget) Coffey of Rudyard; grandchildren, Ronnie Coffey, Kylie Coffey, Jared Coffey, and Shane (Caitlynn) Coffey, Daniel Coffey, Brandan Coffey, Chelcie (Tyler) Coffey-Purner, Scottie Coffey, Courtney (Gene) Carie, Kayla Coffey, and Cody Coffey, and beloved great-grandchildren, Novalee Carie, Ronin Carie, and a third Coffey grandbaby due in June. Ronald was preceded in death by his wife, Brenda; sister, Helen Coffey; brothers, Larry Coffey and Robert Coffey, as well as his parents, Olin and Donna Coffey, mother-in-law Helen Becker and father-in-law Chet Becker. Services will be held Wednesday, November 24, 2021, at St. Joseph Catholic Church in Rudyard. A memorial gathering will be held 11:00 AM to 12:00 PM with a Memorial Mass beginning at 12:00 PM with a luncheon to follow. Memorial Contributions may be made out to the American Cancer Society, PO Box22478, Oklahoma City, OK 73123. Galer Funeral Homes & Cremation in Pickford, Michigan is serving the family. Condolences may be sent to the family at www.galerfuneralhomes.com.

The family of Ronald Joseph Coffey created this Life Tributes page to make it easy to share your memories.

Send flowers to the Coffey family.