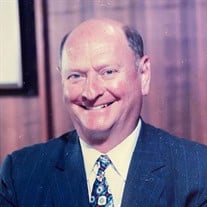 Roy Charles Martin “Sr.”, age 88, born February 11, 1932 in Detroit, Michigan, passed away peacefully at his home on Drummond Island on Wednesday, September 2, 2020, where he lived with his wife of 29 years, Judi Bailey Martin. Roy grew up in Detroit and graduated from De La Salle Collegiate in 1949. He was a proud alumni and continued to support his alma mater throughout the years. From 1950-1952, Roy served with distinction in the U.S. Army Infantry during the Korean War. After the war, he returned to Detroit and married Mary Margaret VanDamme, together they had four children who survived him: Roy Jr. (Liz), Kathleen (Don Noble), Dennis and Jimmy (Beth) Martin. Roy completed an electrical engineering degree at Lawrence Institute of Technology. He served in an apprenticeship with LU58, and then started his own company, Echo Electric, and later went on to own Triangle Electric Co. Roy oversaw numerous major electrical projects that Triangle undertook for GM, Chrysler, Ford Motor, Rouge Steel and Volkswagen. He was a proud member of the International Brotherhood of Electrical Workers, NECA, and Federated Electrical Contractors, a group of 34 business owners of electric companies across the USA, Canada, England and Japan. As a child, Roy learned how to fly fish from Fred Bromwell at Camp Arrowhead in Grayling. Fred Bear taught him skills of archery, which he continued to enjoy throughout his life. Roy was an avid hunter of white tail deer in the Upper Peninsula of Michigan and also loved bird hunting at the side of his beloved dogs Spike, Hunter and Rocky. He enjoyed numerous wild game hunting trips in Costa Rica, Columbia and Montana. Each fall, he would head to Walpole Island in Canada to duck hunt. He found great joy in photography, sailing, flying, snowmobiling, boating, scuba diving and snow skiing at Nubs Nob all his life and was a proud supporter of the Detroit Lions, Tigers and Red Wings. He was also a passionate U of M football fan. Roy was a member of the Detroit Golf Club and The Detroit Athletic Club. Roy retired to Drummond Island with his wife Judi, where they navigated through the North Channel on his boat, Mind Sweeper, after bringing the boat on an epic trip from Portland, Oregon to Lake Huron, via the Columbia River, Snake River and overland to Green Bay, before crossing on to Lake Michigan, truely a feat only a skilled yachtsman would undertake. Roy met his wife Judi on Drummond and they retired in this beautiful setting, surrounded by the pristine blue waters of Potagannissing Bay, where he enjoyed the Finnish tradition of a hot sauna. Roy was a voracious reader who kept his finger on the pulse of world news, politics and science by reading several major newspapers each day. Roy had an exceptionally bright mind and thoroughly undertook learning as much as possible about his many hobbies and interests. He was self-taught, hard-working, intelligent, curious and fearless. Roy was a lifetime member of the Detour Reef Lighthouse Association, National Rifle Association and Drummond Island Sportsman's Club. He was a longtime member of the Drummond Island Hunting & Fishing Club, where numerous friendships were formed while deer hunting, over great meals and the many adventures shared afterward. In addition to his children, Roy is survived by his wife Judi, his brother Richard (Dick) Martin of Grosse Pointe Farms, stepchildren Stephanie (John McDonald), Denise (Dan Marshall) and Joe (Kara) DePaul, his grandchildren Amy Martin, Maggie Martin, Tori Noble, Bobby Noble, Madeline Martin and Sarah Martin, his step-grandchildren Joey Dale, Matt Dale, Sam McDonald, Ellie McDonald, Bella DePaul, Sophia DePaul and Drake DePaul, and his many nieces and nephews. He greatly enjoyed traveling to see his grandchildren’s and step-grandchildren’s sports and loved hearing of their adventures and accomplishments. He was preceded in death by his mother Victoria Fontana Martin, father Roy, aunts Della and sister Mary Fontana SSND, uncles Charles, Angelo, Anthony, and Louis Fontana, and sister-in-law Shirley Martin, as well as his in-laws Glen and Gert Bailey. Donations in Roy’s memory may be made to The Drummond Island Sportsman's Club, PO Box 270, Drummond Island, MI 49726, PIME Missionaries, 17330 Quincy St., Detroit, MI 48221 or to De La Salle Collegiate, 14600 Common Rd., Warren, MI 48088. Burial and memorial service will be private. R. Galer Funeral Home in Pickford, Michigan is serving the family. Condolences may be sent to the family at www.rgalerfuneralhome.com.

The family of Roy Charles Martin created this Life Tributes page to make it easy to share your memories.

Send flowers to the Martin family.