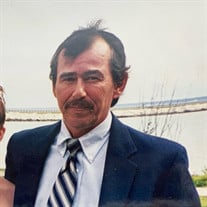 Roy Chester Perrault, age 59, passed away at Mackinac Straits Hospital in Saint Ignace, Michigan, on December 27, 2021. He was born in Saint Ignace on October 28, 1962, to parents, William Sr. and Carlean (Fisher) Perrault. At birth, Roy was... View Obituary & Service Information

The family of Roy Chester Perrault created this Life Tributes page to make it easy to share your memories.

Send flowers to the Perrault family.