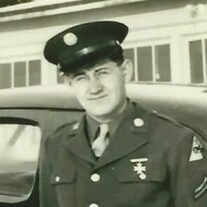 Russell James Hoornstra, 101, of Green Bay, Wisconsin passed away Monday October 18, 2021 at his daughter's home. Dad was born on his parent's farm in Brimley, Michigan on October 9, 1920. He was the only one of six brothers to graduate from high school. He also was the only one to be drafted in the service during WWII in 1942 at the age of 22 and was sent overseas after his training. In 1945 he was wounded twice in one day and the only one to survive out of the 3 of them. After being rescued he spent 21 days coming home on the military ship the Queen Mary in a cast from his arm to his knee. Upon returning to Sault Ste. Marie he went back to work for Michigan Bell and retired in 1983. He and mom built a cottage on Monocle Lake and enjoyed the pontoon boat with many trips around the lake with family and friends. They traveled to Mexico and Canada with their motor home and wintered in Arizona. Later they wintered in Florida where they had a permanent home. Camping in the 50's and 60's in Canada and many of the states was always our summer vacations, sleeping in a tent or the back of the station wagon. No drive-thru for us or McDonalds, it was a cooler and a picnic over a fire or camp stove. Many a dairy queen was passed with much regret, but we did learn a lot about different telephone poles and the price of gas in each city we passed! That was always, still, his first question when you went anywhere. How much was the gas??? Mom and dad were married 70 years until moms passing in 2012. He and mom had some great friends and could find them at the Elks where he was always involved. He has received the Purple Heart, the bronze star, American Campaign Medal, The European-African -Middle Eastern Campaign medal, WWII Victory Medal and the Honorable service label button WWII. They visited the WWII Memorial twice and has said "It's a great memorial, I'll tell ya! We have one of the greatest countries in the world". He was a great man, a great father and grandfather and great hero to our country. Russell is survived by his sons, Dennis (Rosemary) Hoornstra and Dale (Rhonda) Hoornstra; daughter, Diane (Richard) Temmer; grandchildren, Holly Comstock, Shawn (Maria) Comstock, Stephanie Evrard, Kirstyn (Robert) Beaulieu, and Staci (Chad) Palo; great grandchildren, Cassandra (Brian) Diedrick, Preston Florianschitz, Zachary Jahnke, Travis Jahnke, Josa Comstock, Simon Comstock, Annabelle Evrard, Brynn Beaulieu, Lyla Beaulieu, Evan Kyle and Emily Wilson; great great grandchild, Brooks Diedrick. Russell is predeceased by his wife, Eleonore O. (Barker) Hoornstra, brothers, Raymond, Lawrence, Harold, Floyd, and Delbert. Funeral Services for Russell will be Monday October 25, 2021 at 11:00am at Galer Funeral Homes & Cremation, 24549 S. M-129 in Pickford, Michigan with Rev. Vickie Hadaway officiating. Final resting place will be Oaklawn Chapel Gardens.

Russell James Hoornstra, 101, of Green Bay, Wisconsin passed away Monday October 18, 2021 at his daughter's home. Dad was born on his parent's farm in Brimley, Michigan on October 9, 1920. He was the only one of six brothers to graduate from... View Obituary & Service Information

The family of Russell James Hoornstra created this Life Tributes page to make it easy to share your memories.

Send flowers to the Hoornstra family.