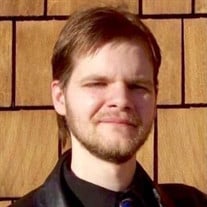 It is with a heavy heart the family of Shawn Michael Durham acknowledge his passing on October 15, 2020 in Sault Saint Marie, Michigan, at 43 years of age. Shawn was born in Juneau, Alaska on December 5, 1976 to John David Durham and Lola Rae (Gorder) Durham. Raised in a military family he spent his childhood living and attending schools and college in Virginia, Kansas and Alaska. As an intelligent student he was always a challenge to educators. He was in the scouting program and attained the Order of the Arrow of Light and rank of Life Scout. Shawn started his lifelong passion for computers first learning to program when he was six years old. Being self and college educated he used his talents to teach, volunteer, build web pages, program, repair and maintain computer systems, mentor, write and play computer games, and enjoyed computer graphic arts. An avid reader, he enjoyed classics, contemporary literature, as well as off the wall and quirky readings. He loved a good or corny joke. He first married Kristi Ann Neiswonger (divorced), to this union was born a son, Jonathan Michael Durham. Shawn married his soul mate Melinda Sue Eastway on July 30, 2011 in Sault Saint Marie, Michigan. This began a short but amazing love affair filled with a shared love of computers, service to their community, camping and traveling. He is survived by his parents John and Lola Durham, his loving wife Melinda (Mindy), son Jonathan, siblings: DeAnn Rae Pate, Renee Michelle Geiszler, Andrew Lee Durham, Kristin Marie Grimm, Erin Elizabeth Lafleur, Mandy Lyn Warren and Crystal Kimberly Latten; 19 nieces and nephews; and 4 great nieces and nephews. He was preceded in death by his grandparents John and Dorothy (Allbritton) Durham and Ray and Janet (Jensen) Gorder and a nephew. Shawn lived his entire adult life with Type One Brittle Diabetes being diagnosed at 19, it robbed him of much physical quality of life, but Shawn never complained. Knowing his mortality was going to be brief he lived his life with the following attributes: Live with no regrets. Don’t sweat the small stuff. Don’t complain about your burdens. Give back more than you ever receive. Live life for today and not for tomorrow, for that may never come. Until we meet again, sealed for all eternity, you will always be in our hearts. Clark Funeral Cremation Burial Services assisted the family with arrangements.

It is with a heavy heart the family of Shawn Michael Durham acknowledge his passing on October 15, 2020 in Sault Saint Marie, Michigan, at 43 years of age. Shawn was born in Juneau, Alaska on December 5, 1976 to John David Durham and Lola Rae... View Obituary & Service Information

The family of Shawn Michael Durham created this Life Tributes page to make it easy to share your memories.

It is with a heavy heart the family of Shawn Michael Durham acknowledge...

Send flowers to the Durham family.