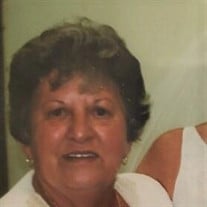 Shirley Ann Koben of Hessel, Michigan, died on October 21, 2020 in Sault Ste. Marie, Michigan. She was born to Benjamin and Ann (Hatton) Doot on August 9, 1939 in Grand Rapids, Michigan. Shirley grew up in Grand Rapids and attended school there. She moved to France for a time and began to start her family. Once she moved back to Michigan, she started working in the factory. She worked there for several years before settling down. She met Gary E. Koben in the early 1970's and they married on July 12, 1973 in Kalamazoo, Michigan. After their youngest son, Gary, was born, Shirley worked on the farm and cleaned houses, but mostly worked at home. Shirley was a member of the Gains United Brethren Church in Caledonia, Michigan as well as the First Union Church in Cedarville, Michigan. Shirley loved to go mushroom picking, barrel racing horses, and painting. She also enjoyed fishing, hunting, and gardening, especially flowers and vegetables. She loved any activity that was outside. Shirley is survived by her husband, Gary Koben; children, Cathy A. (Ed) Young of Moline, Michigan, Sue (Dale) Heintz of White Cloud. Michigan, Jayne (Danny) Lynn of Burnips, Michigan, and Gary (Ashley) Koben of Pickford, Michigan; nine grandchildren; numerous great-grandchildren; and brother, Bill Doot of Dutton, Michigan. Shirley was preceded in death by her parents, Benjamin and Ann Doot; brother John (Arlene) Doot; sister, Katherine "Chick" (Hank) Blacquire; and sister-in-law Diane Doot. No services are planned. The family would like memorial contributions to be made to the Hospice of the E.U.P, 308 W 12th Ave, Sault Ste. Marie, MI 49783

The family of Shirley Ann Koben created this Life Tributes page to make it easy to share your memories.

Send flowers to the Koben family.