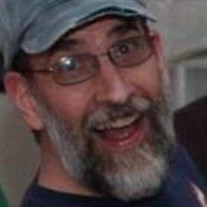 Steven Mark Gulder, age 55, of Pickford, Michigan, died on December 19, 2021, surrounded by his loved ones. He was born on December 16, 1966, in Des Plaines, Illinois to parents Paul Ludwig and Dawn Dorothea (Monson) Gulder. Steve is survived by his wife, Victoria Lynn (Hays) Gulder, six sons, and one daughter by adoption of the heart and their grandbabies, going on six. Benjamin is his oldest, and wife Julianna and granddaughter, Lillietta; Caleb and wife, Cassie and grandson, Zebulun; Justin and wife, Elana and granddaughter, Olivia; Simchah Mashek, and her husband Dalton; Josiah, Paul II, and Ron. Steve had a desire to write a journal of events and entitle it “Par for My Course” journal. He always noticed things that happened in his life, like shaving off all his hair and beard in the spring…and then it would snow! Or when he was trying to fix a computer, and another person sits down to help, and the glitch goes away. These kinds of things happened regularly. Steve was an attendee and later a member of the First Union Church in Cedarville for eighteen years. He was also a member of the Chippewa County Shooting Association along with his family. He was a founding member of the S.P.E.B.S.Q.U.A, barbershop society. He chose to not renew his membership once his family life and expenses were a part of his responsibilities. Steve was very much a family man and was most often at home or with his family when he wasn’t working at Precision Edge. Steve was also a former member of the Chicagoland 4WD club. In his younger years, he enjoyed using his pickup truck like a monster truck; until he had to change out the transfer case, that is. Steve was a Facebook meditator for a group concerning odometer number patterns. His sister noted that his date of death fit his love of number patterns 12-19-2021. Steve was very mechanically minded and could often be found working in his garage on engines. His desire to be a machinist was, in part, what brought his family to the UP. Steve was preceded in death by his father, Paul Gulder. A Memorial service is planned for spring 2022 at the First Union Church in Cedarville. Galer Funeral Home & Cremation in St. Ignace, Michigan is serving the family. Condolences may be sent to the family at www.galerfuneralhomes.com.

Steven Mark Gulder, age 55, of Pickford, Michigan, died on December 19, 2021, surrounded by his loved ones. He was born on December 16, 1966, in Des Plaines, Illinois to parents Paul Ludwig and Dawn Dorothea (Monson) Gulder. Steve is survived... View Obituary & Service Information

The family of Steven Mark Gulder created this Life Tributes page to make it easy to share your memories.

Send flowers to the Gulder family.