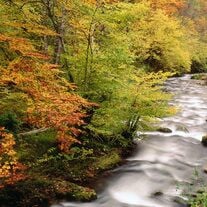 Terry Roy Montgomery, age 63, of Cedarville, Michigan, died February 21,2021 at War Memorial Hospital in Sault Ste. Marie. He was born October 1, 1957 in Saginaw, Michigan, to Harvey Roy and Lorraine Irene (Levi) Montgomery. Terry grew up in Bridgeport, Michigan and spent his high school years playing football and enjoying the outdoors. He obtained a trade education in welding and moved to Houghton, Texas to start his family and pursue his passion in welding. Terry returned home to Bridgeport and decided to plant his roots in 1987 in Cedarville with his family. He was a talented welder and took on many different jobs over the years. Terry was well known for being an outdoorsy man. He enjoyed spending his time in nature, camping, hiking and canoeing. affectionately nicknamed "Monk", Terry was well loved by everyone that knew him. Terry is survived by his daughter Cassandra (Joey) Lorraine Mullins of St. Ignace, Michigan; son Mitchel Roy Montgomery of Cedarville; grandchildren, Eugene, Forest, Izaiah, and Jacob; sister, Penny Grumbley of Saginaw; brothers Harvey Montgomery of Houston, Texas, Bill Montgomery of Saginaw; and sisters-in-law Joanne Fick of Pickford, Michigan, and April Pierce of Clio, Michigan. Terry was preceded in death by his parents Harvey and Lorraine; and brothers; Larry Montgomery and Gary Montgomery. A memorial service will be announced for a later date. R. Galer Funeral Home of Pickford, Michigan is serving the family. Condolences may be sent to the family at www.rgalerfuneralhome.com.

The family of Terry Roy Montgomery created this Life Tributes page to make it easy to share your memories.

Send flowers to the Montgomery family.