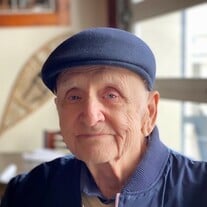 Thomas Gilbert Apczynski, age 89, of Northport, Michigan passed away peacefully at Munson Medical Center in Traverse City, surrounded by his loving family. He was born in Detroit on April 27, 1932 to Edward A. and Clara (Rembacki) Apcyznski. Tom married Marie Delphine (Del) Gratowski on February 21, 1953. They were long-time residents of Warren, Michigan before retiring in 1994 and then splitting their time between homes on Drummond Island and Orlando, Florida. They downsized to Northport in 2014 to be closer to their daughter. Tom graduated from St. Joseph High School in Detroit before proudly serving his country in the United States Army in the Korean War. He then apprenticed as a brick mason and worked for Rohn Fireproofing Company for more than 35 years, contributing to the construction of many iconic buildings in Detroit and the surrounding suburbs (e.g., the Pontchartrain hotel, AAA Michigan headquarters, etc.). For many of those years, he was a foreman supervising crews of other masons, and took great pride in both the quality of the work and the profits he earned for his employer on each job. In the latter part of his career, when construction work slowed in the Detroit area, he temporarily relocated to Orlando to supervise construction of some of the exhibits at Epcot Center at Walt Disney World. His grandchildren liked to brag to their friends that their grandpa built Disney World. Tom lived an active life. He was very proud of his Polish heritage. He loved spending time with his extended family, teaching them to deer hunt and fish for perch, Cisco and King and Coho salmon. He also enjoyed gardening and was a very capable amateur mechanic, plumber and electrician. His grandchildren fondly recall him giving them tractor rides on hunting property he and Del owned near Gladwin. He always had cookies in a cabinet to share with them and his great grandchildren. He generously shared stories from his youth, always infused with moral lessons. A few of Tom's many other interests included: stock market investing; watching movies, particularly documentaries; visiting the Orlando theme parks with his grandchildren; and feeding the birds, deer and other wildlife which frequently visited their backyard. Tom and Del often could be found building and crafting gifts (such as; wildlife wood carvings, stain glass topped cement tables, bassinets and rocking horses) that were in demand by family and friends. In his later years, you would find him on his iPad either watching documentaries or reviewing family photos and videos. For several years on Christmas Eve, Tom and Del delighted their family with an annual self-shot and edited video which poked fun at themselves. He was a formidable euchre player, and was virtually unbeatable when teamed with Del. Together they were devout Catholics -- most recently attending Mass every Sunday at nearby St. Wenceslaus Church. Tom was preceded in death by Delphine, his parents, a sister (Delphine Apczynski), and an older brother (Edward E. Apczynski). Surviving are daughter Denise (Gregory) Bond of Northport, sons Jeffrey (Carol) of Beverly Hills, and Thomas E. (Christine Douglas) of Livonia, and a younger brother, Frederick (Mary) Apczynski of Elk Rapids. Tom also leaves seven grandchildren (Jason, Breanne, and Travis Bond; Jeffrey and Christopher Apczynski; Lauren and Thomas S. Apczynski) and their spouses/partners, six great-grandchildren, sister-in-law Gertie (Thomas) Gratowski, and many nieces, nephews, and their families. Tom was a role model to his children and grandchildren who feel blessed to have had him in their lives and will cherish the many wonderful memories they made together. His family would like to express their deepest appreciation to the staff at Munson Medical Center, his doctors, Dr. Selle and Dr. Gerling, and Deacon Martin Korson for their wonderful care and compassion. Burial and Funeral Mass will be held in the spring at St. Florence Catholic Church on Drummond Island, MI. Please check the obituary at galerfuneralhomes.com for schedule updates.

Thomas Gilbert Apczynski, age 89, of Northport, Michigan passed away peacefully at Munson Medical Center in Traverse City, surrounded by his loving family. He was born in Detroit on April 27, 1932 to Edward A. and Clara (Rembacki) Apcyznski.... View Obituary & Service Information

The family of Thomas Gilbert Apczynski created this Life Tributes page to make it easy to share your memories.

Send flowers to the Apczynski family.