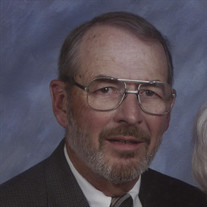 Tom Lippincot Edie, age 82, of Neebish Island, Michigan, died Thursday, October 12, 2017, at the Hospice of the E.U.P. Ball Hospice House in Sault Ste. Marie, Michigan. He was born February 10, 1935, in Arlington, Ohio, to Theron Franklin Edie and Rachel (Lippincot) Edie. Tom grew up in Ohio where he earned Eagle Scout designation and, in 1953, graduated from Mt. Blanchard High School. He earned a Bachelor Degree in Speech and Theatre Arts from Bowling Green University before serving in the United States Navy from 1960 – 1963. After his service, he sold insurance for about a year before working as the Assistant Circulation Manager at the Courier in Finlay, Ohio, and as Circulation Manager at the Review Times in Fostoria, Ohio. During this time he earned a second Bachelor Degree in Business Management from Tiffin University in Tiffin, Ohio. He moved on to work as the Circulation Director at the Holland Sentinel in Holland, Michigan. In a career change, he sold industrial chemicals for Certerfied in Holland and owned and operated Helping Hands of Holland, a home maintenance service. In 1991, he moved to Neebish Island where he operated a resort at the end of 15 Mile Road which his parents had previously owned. He also worked in Sault Ste. Marie as the Maintenance Supervisor at Northern Transitions. Tom was an active member of the Neebish Island Presbyterian Church where he served as a ruling elder and often sang solos during church services. In the winter months, when the Neebish church was closed, he attended the Pickford Presbyterian Church where he sang baritone in the choir. Being a member of the Neebish Island Volunteer Firefighters was a great source of pride. Tom loved to golf and particularly enjoyed golfing in the Thursday Morning Senior League at Munoscong Golf Course in Pickford. He also enjoyed spending time in the woods, singing, and an occasional visit to the casino. He played cards – especially euchre, and he didn’t care who he beat. He built his dream home on Neebish from lumber he sawed himself from logs he cut from the property he owned. Tom is survived by his longtime companion, Dorla Parr of Neebish Island; sons, David (Sandy) Edie of Newberry, Michigan, and James (Dorie) Winegard of Neebish Island; grandchildren, Aaron, Casey, Patrick, Justin, Grace, and Melissa; great grandchildren, Aiden, Tristan, Blaze, Xander, and Phoenix; and brother, John (Mary) Edie of Findley, Ohio. Tom was preceded in death by his parents; wife, Marilyn Edie; son, Scott Edie; and sister, S. Anne Edie. Services will be held Tuesday and Wednesday, October 17 and 18. On October 17, visitation will be held from 4:00 P.M. until 6:00 P.M. at R. Galer Funeral Home, 24549 S. M-129, in Pickford. On October 18, services will be held at the Neebish Island Presbyterian Church. Visitation will be held from 1:30 P.M. until 2:30 P.M. followed by the funeral service at 2:30 P.M. and then burial in the Neebish Island Presbyterian Church Cemetery. Memorials may be made to Neebish Island Presbyterian Church for a Special Needs Fund, c/o Les Laitinen, Treasurer, 9847 E. 17 Mile Road, Barbeau, MI 49710.

The family of Tom Lippincot Edie created this Life Tributes page to make it easy to share your memories.

Send flowers to the Edie family.