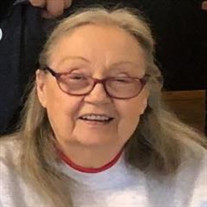 Twyla Montana Fredrickson died at Ball Hospice House in Sault Ste. Marie, MI, on September 17, 2020, after a brief illness following a recent cancer diagnosis. Twyla was born on June 26, 1941, in Havre, MT, to Earl C. & Ida (Johnson) Renshaw. They moved to the Sault shortly afterwards. Twyla graduated from Sault High in 1959, then graduated from the LPN program at Northern Michigan University. After graduation, she worked as an LPN at War Memorial Hospital. She married Stanley R. Fredrickson in October 1961. After they married, she spent her time raising her two children, Sharon & Paul, while her husband served in the Coast Guard. She worked in the lunchroom and as a playground monitor at Lincoln School in the early 1970s. She was also a Cub Scout den mother and was also one of the first women to be an Assistant Scout Leader in the Boy Scouts. In the late 80s, she started working as a black jack dealer at Kewadin Casino, later becoming a dealer trainer, then switching to security before her retirement, after which they moved to Brimley. Twyla loved being in nature and spending time with her grandchildren. She was a proud and active grandmother. She enjoyed crocheting, counted-cross stitch, drawing, ceramics and reading. She was a chorus member in several productions at the Soo Theatre and had roles in Guys n’ Dolls and South Pacific. She loved going to Tahquamenon Falls and Brimley Beach, and going to lunch with her friends from her ceramics group. Twyla is survived by daughter Sharon (Mark) SanAngelo of Sault Ste. Marie, MI. Grandchildren Michael Beck of Ann Arbor, Brandon Beck of Cheyenne, WY, Hollyann SanAngelo of Indianapolis, IN, and Tony SanAngelo of Sault Ste. Marie, Ontario. She is also survived by her brother, Lance Renshaw of Lansing, and her cat, Ralph. She was predeceased by her parents, her husband of 52 years, Stanley, son Paul Fredrickson in 1991 and brothers Earl C. Renshaw, Jr., Rodney Renshaw, and sister Erma Renshaw. Calling hours will be from 5:00PM until 7:00PM, Thursday, September 24, 2020, at Clark Funeral Cremation Burial Services. Interment will be at Oaklawn Chapel Gardens. In lieu of flowers, memorials may be left to Ball Hospice House in Sault Ste. Marie.

The family of Twyla Montana Fredrickson created this Life Tributes page to make it easy to share your memories.

Send flowers to the Fredrickson family.