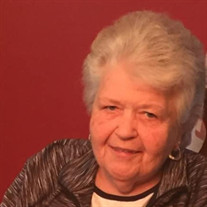 Veronica Rose Burton “Miss Roni”, age 78, of Brimley, Michigan, passed away unexpectedly on February 3, 2021, in Sault Ste. Marie, Michigan. She was born September 26, 1942, is Goetzville, Michigan, to John and Mary (Crusu) Potoczak. Roni grew up in Goetzville and graduated from DeTour High School. After graduation, she began working as a teacher aid at Raber Township Elementary School and worked at the Goetzville Bar. One day while working at the bar she met Gerald “Hop” Burton. They married on May 20, 1967, at St. Stanislaus Kostka Catholic Church in Goetzville. They moved to Brimley, Michigan, in 1967 where they began their family and raised two children. Roni worked at several convenience stores over the years including Hascall’s, Timmers, Iroquois, Raco Lodge and North Shore Market. She retired in 2016 and has tried to keep herself busy during her retirement. Roni was a devoted Catholic. She also was a member of the Bay Mills Township Homemakers. She was an Election Official for many years and a 4-H leader when her children were young. Roni liked doing many things such as crocheting, fishing, camping, gardening, and watching birds. She loved collecting cows and cookbooks. Roni enjoyed spending time with her beloved pets and her precious grandchildren. She was known for her baking, especially pistachio bread and coconut cakes. She was always there to help anyone in need! Roni is survived by her husband, Gerald “Hop” Burton of Brimley; son, Gerald (Stacey Savoie) Burton Jr. of Sault Ste. Marie; daughter, Tina (Shawn) Scott and grandchildren, Katlyn Scott and Wyatt Scott of Coldwater, Michigan; sisters-in-law, Bette Burton of Harbor Beach, Michigan, and Karen (Larry) Obey of Newberry, Michigan; brother-in-law, Oren (Barb) Burton of Sumner, Washington; and several nieces and nephews. Roni was preceded in death by her parents; brother, Edward (Sue) Potoczak; brothers-in-law, Daryll “Tim” Burton and Roger Burton; and sisters-in-law, Delores “Laurie” Bergman, Donna Jean (Jason) Clark, and Carolyn Burton. Visitation will be held on February 13, 2021, from 11:00 AM to 1:00 PM at R. Galer Funeral Home, 24549 S M-129 in Pickford, Michigan. Mass of Christian Burial will be held at St. Stanislaus Kostka Catholic Church in the spring. Final resting place will be St. Stanislaus Catholic Cemetery in Goetzville. In lieu of flowers, memorial contributions may be made to the family to be distributed to various organizations or Catholic masses in her memory. Condolences may be sent to the family at www.rgalerfuneralhome.com.

The family of Veronica Rose Burton created this Life Tributes page to make it easy to share your memories.

Send flowers to the Burton family.