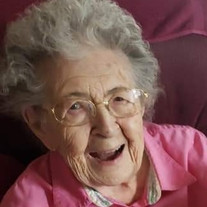 Virginia M. Olmstead went home to be with her Savior on November 2, 2021. She was born August 31, 1914, at her residence on Abe Street, St Ignace MI, the daughter of the late John Baptiste and Philomen (Grondin) Routhier. She attended Ursuline Academy. In the winters she could be found cross-country skiing on her way to school. Growing up she and her family spoke only French. She was preceded in death by her half-brother Captain John Routhier and sister-in-law Lenoir Routhier. Her brother John, a merchant marine, would give her .15 cents when he was in port so she could enjoy going to the movie and have popcorn. Virginia married Ora John Olmstead and had two sons John Oran Olmstead and Donald Francis Olmstead, Sr. Virginia and her family lived on a farm. She enjoyed playing piano and gave piano lessons. They rented a section of their home out to support income. While working for the City of St Ignace, she was never one to be involved with politics. But after much urging, she decided to try. She wrote a note to the mayor on a scrap of paper saying, "Please consider me for the position of City Clerk". She ended up spending 24 years as City Clerk to St Ignace. Also, being a devout Catholic, a member of St Ignatius Loyola Catholic church, she was very active doing for others until age and health prevented this. Known to her family as Nunnun and Grandma, she loved spending time with her sons and their families. Virginia had a love for life. She enjoyed playing cards, bingo, quilting, baking, berry picking and flying. She would travel to see family or with girlfriends around the US or Mexico. Those that knew her best enjoyed the many stories of the history of the town and its people. In her later years, she would talk with the younger people and be able to tell them how she either knew or was related to them through the history of the town. She was preceded in death by her sons John Oran and Donald Francis, daughter-in-law Zoe Almeda (Clark) Olmstead and grandson Donald Francis Olmstead, Jr. Those left to cherish her memory: daughter-in-law Joan (Sigvartson) Olmstead and nephew John B. Routhier. Grandchildren include: Gilbert (Allison), Timothy (Sue), Brent (Becci), Jacquelyn Evans (Casey), Stephanie Wiper (Steve) and David (Mary). Great Grandchildren: Andrew (Lisa), Michael (Charlotte), Kristen (Aaron), Joshua, Benjamin (Heather), Amy Lynn, Maclellen, Kate, Sarah, Matthew, Oliver, Aidan, and Breccan. She also enjoyed 11 Great Great grandchildren. Visitation will be on Monday, November 8th from 10:00 am to 11:40am with the rosary and funeral following at St. Ignatius Loyola Church in St. Ignace with Father Frank Ricca officiating. If you can't attend, the rosery and funeral will be streaming live on Facebook. Send friend request to Tim LaJoice and he will give you access. In lieu of flowers, memorial contributions may be made to The Hope Chest - 250 Ferry Lane, St. Ignace, MI 49781

Virginia M. Olmstead went home to be with her Savior on November 2, 2021. She was born August 31, 1914, at her residence on Abe Street, St Ignace MI, the daughter of the late John Baptiste and Philomen (Grondin) Routhier. She attended Ursuline... View Obituary & Service Information

The family of Virginia Mary Olmstead created this Life Tributes page to make it easy to share your memories.

Virginia M. Olmstead went home to be with her Savior on November...

Send flowers to the Olmstead family.