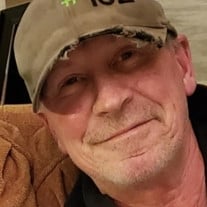 Wayne Albert Benson, age 61, of Sault Ste. Marie, Michigan, passed away unexpectedly on April 14, 2021 at War Memorial Hospital. He was born on February 19, 1960 in Sault Ste. Marie to John Francis "Jack" and Josephine Lillian (Postula) Benson. Wayne grew up in Goetzville, Michigan, and graduated from DeTour High School with the class of 1978. While in High school he attended the skill center and earned his welding certificate. After graduation, he headed up west to Menominee, Michigan, with two local friends and began working for Marinette Marine as a welder. He moved on to work for Giddings and Lewis before moving back home to Cedarville, Michigan, and working for Flotation Docking Systems. As well as being a skilled welder, Wayne had a passion for the outdoors. The Brook Trout did not stand a chance, he knew every stream in the Eastern Upper Peninsula. He loved fishing, hunting, trapping, riding snowmobile, four-wheeler, and motorbike. Wayne enjoyed sharing all his outdoor skills with his grandson Austen and granddaughter Collins. He was so proud to share the stories of their outings. Wayne will be sadly missed by his brother; Greg (Madonna) Benson of Pickford, Michigan; nephews, Justin (Lindsey) Benson, Mickael Cantin and Nolan Benson; great-nephews- Jack and Jameson; daughters, Melanie (Dan) Minta of Sault Ste. Marie and Brittany Bawks of Sault Ste. Marie; and grandchildren, Austen and Collins; special friends and hunting buddy, Justin and Ashley Peterson. Wayne is preceded in death by his parents. Per Wayne's wishes no services will be held. Interment will be at N. Raber Cemetery, in Raber Township, Michigan. Galer Funeral Homes & Cremation of Pickford is serving the family. Condolences may be sent to the family at www.rgalerfuneralhome.com.

The family of Wayne Albert Benson created this Life Tributes page to make it easy to share your memories.

Send flowers to the Benson family.