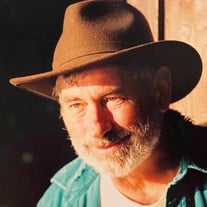 William Thomas Alguire III, born January 11,1943 in Flint, Michigan, to Mary Elizabeth Bradley Alguire and William Thomas Alguire, Jr., passed away on June 4, 2021, at his home on Drummond Island, Michigan. Bill, or Wild Bill as he was known to some, graduated from Flint Northern High School and was working in an automotive plant and attending Flint Junior College when he was drafted for the war in Vietnam. He served in the U.S. Army's 1st Cavalry Division Air Mobile from 1965-1967 including a year in Vietnam. The effects of chemical warfare were prolonged, earning him a 100% disability rating from the Veterans Administration. Throughout his life he dealt with adversity with humor and an independent spirit. No stranger to pain, he never complained. In his younger years he was athletic - a member of the high school swim team and an excellent skier, both water and downhill. His manners were as impeccable as his grammar. He liked fast boats and classic cars. After the war, he earned a degree in Social Work from Northern Michigan University and a Master's degree in Education with teaching certification from Eastern Michigan University. He worked as a teacher/counselor with disadvantaged youth in the Flint Public Schools' Office of Special Projects, where he built lasting relationships. In 1994, he retired to his home on Drummond Island, where he enjoyed feeding the deer, birds and occasional bear, watching freighters and sunsets come and go, listening to the loons, and waiting for the annual return of hummingbirds and spring flowers. In addition to wildlife, he also enjoyed the wildlife, relishing in equal measure complete solitude and gregarious companionship. Among the pre-deceased are his parents; sister, Mary Jo Alguire Correll; and brother, Andrew Bradley Alguire. Surviving are his children, Dana Lucile (Steve) Hoffman and William Thomas (Jeanette) Alguire IV and their mother Carmen Duncan Alguire along with grandchildren, Ainsley Hoffman, Sawyer Blackburn and Amelia Alguire; siblings, John Stephen (Sharon) Alguire and Anne Louise (Rick) Meeks; brother-in-law, Don Correll, sister-in-law, Linda Alguire and a host of nieces, nephews, cousins, and friends. The family will gather to celebrate Bill's life in a private ceremony. Those wishing to honor his memory may do so by contributing to the Drummond Island Veterans' Memorial Park, Attention: Georgiana Potter, PO Box 225, Drummond Island, MI 49726. Galer Funeral Homes and Cremation in Pickford, Michigan is serving the family. Condolences may be sent to the family at www.rgalerfuneralhome.com.

The family of William Thomas Alguire, III created this Life Tributes page to make it easy to share your memories.

Send flowers to the Alguire family.