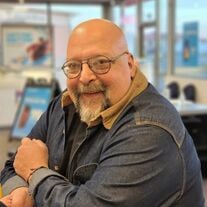 William Vance "Bill" Badour, age 53, of Cedarville, Michigan, died on January 18, 2021, in Detroit, Michigan. He was born May 17, 1967, in Trenton, Michigan, to William and Ann (Nishanian) Badour. Bill grew up in Hillman, Michigan. At a young age, Bill won a contest selling newspapers and his prize was a trip to Disney World. When Bill was 14 years old, he was invited to be the lead singer in a bluegrass band. Because of his young age, his parents were required to be at every bar he played at. Bill has loved to play music ever since and his parents beamed with pride every time Bill played music. Bill left high school to help his parents operate the family business, Hilltop Party Store. Even though he left high school, he graduated with a GED before his actual graduating class. A short time later, the family moved and Bill worked alongside his parents in managing large apartment complexes in the Metro Detroit area. Bill and his Dad were the maintenance guys and Anne managed the offices. Bill and his dad decided to complete their HVAC certifications together to enhance their careers. At 21 years old, Bill was well known in the apartment industry and was responsible for leading crews of maintenance workers across several large complexes. Bill lived in many places across Michigan and he was needed at apartment complex locations. In each and every city Bill lived, he played his music at bars and various venues. In the 1980's he was in the top three bands in Metro Detroit playing 7 nights a week and working a full time day job as well. When Bill was about 23, a girl walked into Les' Country Lounge in Flatrock, Michigan and heard a beautiful voice on stage. She walked up on stage and slid her phone number into his pocket and said "Call and sing to me sometime". He called Paula and they went on to be engaged, but as things go when you are young and dumb, things didn't work out between them and they went their separate ways. When Bill was 17, a man named Gerald McShane introduced the family to the Cedarville area. They fell in love with the community and decided to build a hunting cabin in 1984, where they spent many years "vacationing" and developing that father/son hunter bond around the fireplace telling those big buck stories. For many years, Camp tradition is to watch "Escanaba in da moonlight" on opening day each year. In 2001, Bill relocated to the family cabin in Cedarville and shortly after, his parents joined him. In 2002, his son Dylan came to live with Bill and he raised him in "da woods". Every time Bill spoke of Dylan - he got a twinkle in his eye. His heart beamed with pride at everything Dylan accomplished. Bill had never missed a birthday as Dylan was growing up and when Dylan joined the Navy and was stationed at many places across the United States, Bill made sure that he was with his son on his birthday no matter where Dylan was stationed. They were the absolute best of friends! Bill always said "Dylan, we are a team - together we can do anything….we are an unstoppable force". Bill made a name for himself in Cedarville and was loved by the community. He just had that gentle personality and never sweated the small stuff, he simply loved all "his people". He loved to donate his musical talents to people who needed a helping hand or a pick me up. He was very "instrumental" in donating to fundraisers, veteran organizations and to pretty much anyone who needed a few hours of musical happiness in their lives. He loved and respected our veterans and was proud to be a member of the Forgotten Eagles of Michigan. Bill loved deeply and he touched so many hearts. In 2016, Paula rejoined her soul mate Bill in Cedarville, they lived life to the fullest and there was never a shortage of love and laughter in their home. They married in 2020 and they worked together every day to ensure that customers and friends had their heating and cooling needs met by their company, Bill's Heating and Cooling. Bill is survived by his beloved wife and soul mate Paula and his son Dylan. As he was growing up as an only child, he also was very close to many cousins and relatives on his mom's side of the family, the Nishanian family and will be missed by them as well. He is preceded in death by "Ma" Anne Badour and his dad William Badour. Services will be held Saturday, January 30, at Les Cheneaux Christian Fellowship, 202 N. Blindline Road in Cedarville. A Gathering Time will be held from 1:00 PM until 3:00 PM followed by a Memorial Service starting at 3:00 PM. "Gnight from da woods gang" will be heard and remembered in our heads forever. Bill is back with ma and dad and playing music for God. The heavens are a more musical and magical place with him there. Until we meet with him again, know that he is with all of us in our hearts, cracking jokes and keeping us laughing at the memories of the "Big Bald Guy"! R. Galer Funeral Home of Pickford, Michigan is serving the family. Condolences may be sent to the family at www.rgalerfuneralhome.com.

William Vance "Bill" Badour, age 53, of Cedarville, Michigan, died on January 18, 2021, in Detroit, Michigan. He was born May 17, 1967, in Trenton, Michigan, to William and Ann (Nishanian) Badour. Bill grew up in Hillman, Michigan. At a young... View Obituary & Service Information

The family of William Vance Badour created this Life Tributes page to make it easy to share your memories.

Send flowers to the Badour family.