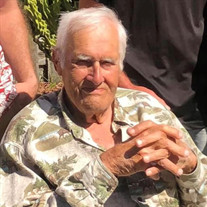 William “Bill” Alfred Howland, age 86, of Rudyard, MI, passed on from this life to the next on Sunday, January 16, 2022 with his boys by his side. Bill was born on June 21, 1935, to William and Sarah Howland in Sault Ste. Marie, Michigan. He grew up with his three siblings in the Sault area. Bill enlisted in the U.S. Marine Corps and served proudly on active duty for 3 years. He was deployed to Korea during the end of the Korean War before being released from active duty and transferred to the Marine Corps Reserve in 1957, to which he served for the next 8 years. While serving in the Reserves, Bill lived and went to work in St. Paul, Minnesota. It was there when he and Lila Caskey’s worlds collided. It was love at first sight, so much, that after only one date and several meetups later that they were married that same year on December 7, 1957. It wasn’t long there after that he convinced her to move back to his hometown in Sault Ste. Marie, Michigan to start their life together. Bill worked at the Ford dealership in the Sault for several years as a mechanic. After welcoming two sons, Billy and Mark, their family relocated to Rudyard, Michigan in 1968 to put down their roots. In 1969 Bill and his brother in law purchased Rudyard Auto Sales where they bought and sold vehicles, did mechanic work, and sold car parts. In the 31 years at Rudyard Auto Sales, Bill made many friends whom he loved to have coffee breaks with, tell jokes to, which essentially lead to friendships that would last the rest of his life. Because Bill only knew how to have boys, he and Lila welcomed two more sons, Paul and Brian, and it was then that their family was complete. While raising four rambunctious boys was quite a handful for the Howland household, their lives were full of vacations, adventures, and summers at their cabin on Brevort Lake. His boys were his pride and joy and Bill did everything he could to teach them about love, life and how to live it. While being blessed with a much fulfilled life, Bill also endured several devastating heartaches. Between 1984 and 2005 he tragically lost his son Paul, his son Brian, and his beloved wife Lila. And while one would think that God was testing a man’s strength to carry on, a shining light in a time of total darkness came: her name was Minnetta “Gail” Mayer. Their families were lifelong friends, and similar to Bill, Gail also suffered the loss of her husband the same year Lila passed. The two reconnected and found life within each other. Bill and Gail married that October 17, 2005. Bill and Gail loved to go camping, fishing, going to oldies music festivals, playing cards, garage sale shopping, and enjoyed their winters down at their Florida home in Brooksville. Bill loved Gail like something fierce and was completely heartbroken by her sudden passing in 2020. Through all his ups and downs, Bill was always well known for his contagious smiles, laughter, sometimes dirty jokes, and telling many stories from his past. If you couldn’t find him to have coffee or play cards with, that was probably him driving by with his boat to go fishing for the day until he couldn’t fish no longer. He will be missed dearly by his family, many friends, and his loyal companion till the end, Buddy his dog. Bill’s living legacies are his sons, William “Billy” Howland Jr (Betty McDonald) and Mark (Alivia) Howland. He is also survived by his beloved grandchildren, Tanner Howland, AJ (Dana) Howland, Paul Howland (Emma Doty), Garrett Howland, Justin Hosey, Brianna (Cody) Alton, and Haiden Howland. Also surviving is a number of nephews, nieces, and several great grandchildren. Bill was preceded in death by his parents, William and Sarah Howland, his sister Patricia Keelen, brothers John Howland and Alex Howland, his sons Paul Howland and Brian Howland, wife Lila Howland, grandson Marko Howland, and wife Minnetta Gail Howland. Cremation has taken place per Bill’s wishes. Funeral and a veteran memorial graveside service are being planned for late spring 2022. Burial will take place at the Rudyard Township Cemetery at that time. Memorial donations can be made to the Wounded Warriors Project in William Alfred Howland Sr.’s honor. Galer Funeral Homes & Cremation in Pickford, Michigan is serving the family. Condolences may be sent to the family at www.galerfuneralhomes.com.

The family of William "Bill" Alfred Howland created this Life Tributes page to make it easy to share your memories.

Send flowers to the Howland family.