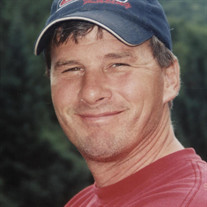 William John Ryan Jr. “Billy”, age 49, of Pickford, Michigan, died unexpectedly on Thursday, July 29, 2010 while working in Grand Rapids, Michigan. He was born November 14, 1960 in Detroit, Michigan. Until he was twelve years old, Billy's family lived in Taylor, Michigan and then they moved to Pickford where Billy graduated from high school in 1978. Since his family had moved back to Taylor, Billy moved back there as well for a few years. He worked hard as a truck driver, welder, and mechanic and saved money toward his goal of moving back “Up North”. He returned to Pickford about 20 years ago and lived with friends while he built his dream home. He worked for Flotation Docking Systems of Cedarville, where he performed many different jobs. Billy was an avid outdoorsman who enjoyed snowmobiling, boating, riding his ATV, hunting, and fishing. If Billy wasn't outside enjoying the outdoors, he was inside watching Nascar. Billy was a jack of all trades and a master of many. He was very giving of his time and talents to anyone who needed his help. Billy was a loving, wonderful son to his parents as well as to his in-laws. Billy was an amazing dad. Spending time with his son was his greatest joy. He was also a wonderful, caring husband, a good friend to many and loved by all who knew him. Billy is survived by his wife, Jennifer Jane (Moore) whom he married, September 7, 1996, and their young son, Zachary Thomas Ryan. Also surviving are his parents, William and Sharon (Sweeney) Ryan of Taylor; his sister and her husband, Susie Ryan and Thomas Foote of Newport, Michigan and their children, Arianne, Aaron, and Austin Foote. Billy will also be missed by his father and mother-in-law, Tom and Karen Moore of Cedarville; sisters-in-law, Molly (Todd) Snyder of Cedarville and Miami, Florida, and Kirsten (Jason) Bohn of Cedarville; and nieces and nephews, Ellie and Ethan Snyder and Emma and Thomas Bohn. Billy was preceded in death by his grandparents, John and Mae Ryan and Richard and Edna Sweeney. Visitation will be held Tuesday, August 3 from 4:00 P.M. until 8:00 P.M. and Wednesday, August 4 from 11:00 A.M. until 1:00 P.M. at Reamer Galer Funeral Home, 24549 S. M-129 in Pickford. Funeral services will be held on Wednesday, August 4 at 1:00 P.M. at Reamer Galer Funeral Home. Burial will be in Cedar Cemetery in Cedarville. Memorial contributions may be made to the Billy Ryan Memorial Scholarship Fund, c/o Les Cheneaux Community Schools, P.O. Box 366, Cedarville, MI 49719. Condolences may be sent to the family at www.reamergalerfuneralhome.com.

The family of William "Billy" John Ryan Jr. created this Life Tributes page to make it easy to share your memories.

Send flowers to the Ryan family.