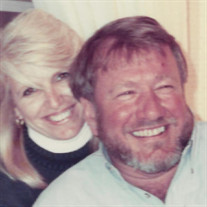 Bob Wytiaz was born on October 6, 1942 in Edgeworth, Pennsylvania, the oldest of five children to William & Mary Wytiaz, who were both descendants of Ukrainian immigrants. His beloved siblings included his “Irish twin”, Janet Wytiaz (Robert) Gross, of Corpus Christi, Texas, his brother Michael “Bud” (Beverly) Wytiaz of Silver Lake, Ohio, brother James (Ava) Wytiaz of South Thomaston, Maine, and baby brother Thomas Wytiaz of Warren, Maine. Bob was senior class president at Ambridge High School, where he played the saxophone and achieved Eagle Scout status. He graduated from Penn State University with a degree in Metallurgical Engineering, and continued on as the Chief Metallurgist for two Detroit steel companies over the course of several decades. He lived in Birmingham, Michigan, but traveled frequently for work, and loved to get away for sailing adventures. His love of sailing the Great Lakes, North Channel, and the Georgian Bay brought him in 1986 to the picturesque place where he would decide to stay forever- DeTour Village, Michigan. Bob enjoyed DeTour as a vacation home initially, but retired there permanently in 1995- the same year that he married the love of his life, Ellen “Sandy” Harsin Wytiaz in a private ceremony on Mackinac Island. They enjoyed an active social life in the village with countless cherished friends and participated in many community activities. Bob & Sandy loved to entertain in their Victorian home on “Main Street”, as well as traveling to places near and far. Bob was a fun-loving, dynamic and outgoing person, but also very intelligent and creative. His love of architecture and skills could be seen in his numerous architectural drawings and sketches, and he was also quite proficient in woodworking and watercolor painting. He loved cooking- and even more so- eating fine food. Bob had a keen memory and was quite a colorful storyteller. There were few things that he enjoyed more than relaxing at the hearth by a perfect wood-burning fire with his cat. Bob passed away suddenly yet peacefully in his home on December 26, 2021 after a joyous Christmas weekend with his daughters Natalie & Emily Wytiaz, who were beside him when he gained his angel wings to rejoin Sandy, who preceded him in death in 2014. He is survived by many beloved friends and family, including extra-special friends Jack Gardner of Sault Sainte Marie, and Marilyn Opolka of Goetzville. Memorial contributions can be made to the DeTour Village Ambulance Corps via Central Savings Bank, PO Box 188, DeTour Village, MI 49725. A memorial service in town will be planned for pleasant weather in 2022 when all of his loved ones can gather to celebrate his life. Bob would want you to “Enjoy Yourself- It’s later than you think...” Galer Funeral Home & Cremation in St. Ignace, Michigan is serving the family. Condolences may be sent to the family at www.galerfuneralhomes.com.

Bob Wytiaz was born on October 6, 1942 in Edgeworth, Pennsylvania, the oldest of five children to William & Mary Wytiaz, who were both descendants of Ukrainian immigrants. His beloved siblings included his &#8220;Irish twin&#8221;, Janet Wytiaz... View Obituary & Service Information

The family of William "Bob" Robert Wytiaz created this Life Tributes page to make it easy to share your memories.

Send flowers to the Wytiaz family.