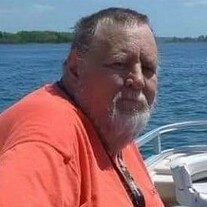 William Francis Brabant, 68, known to many as "Buffalo", died on April 18, 2021, two days before his 69th birthday. He leaves behind a daughter, Buffy Brabant and granddaughter, Eva Brabant who both cared for him during his long illness with kidney failure. He was preceded in death by his wife, Sandy (Streeter). His parents, Francis "Pat" Brabant passed in 1995 and Margaret Brabant in 2009. The first of 10, Bill saw the passing of siblings; Patrick in 1994, Nancy (Cantafio) in 2010 and Cathy (Aday) in 2011. He will be missed by siblings; Lisa McBride (Victor) of Spokane WA, Mary Simpson (Andy) of Horicon, WI, Donald Brabant (Rosemary) of Sault Ste Marie, MI, Ronald Brabant of Sault Ste Marie, MI, Robert Brabant of Kinross, MI and Douglas Brabant (Tami) of Beaver Dam, WI. and his nephews and nieces. He loved his dogs who will forever be waiting for him to come back home. In high school, he participated in ROTC and FFA. He graduated from Michigan State University. In the Navy, Bill served as a ship engineer where he had the honor of being the first to master all stations on the ship. Early in life Bill was given the handle of "Buffalo". He shared it with his daughter, Buffy. His friends and family will long remember his stories of growing up in the Soo and life in the Navy. He used his love of writing to produce an internet newsletter, "Buffalo Chips", which focused on humor and his views on life. Buffalo Chips was written regularly for many years and had a vast following. Many of Buffalo's "Herd" kept the friendship going to this day. A Memorial service for family and friends will be set at a later date. Clark Hovie Galer Funeral Home Assisted the family with arrangements.

William Francis Brabant, 68, known to many as "Buffalo", died on April 18, 2021, two days before his 69th birthday. He leaves behind a daughter, Buffy Brabant and granddaughter, Eva Brabant who both cared for him during his long illness with... View Obituary & Service Information

The family of William Francis Brabant created this Life Tributes page to make it easy to share your memories.

William Francis Brabant, 68, known to many as &quot;Buffalo&quot;, died...

Send flowers to the Brabant family.